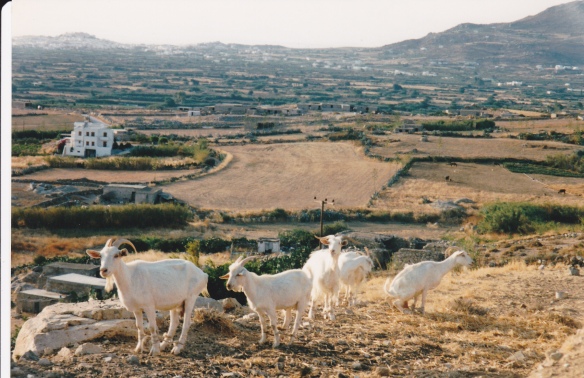 Having just spent a week driving a motorscooter around Italy’s beautiful but treacherous Imalfi coast, justifiably, my friend Indira had picked up either bravado or a deathwish.   Consequently, she was fearless driving a motorscooter on the empty roads crossing the barren landscape of the Greek island of Naxos.

Afraid of wrecking on my moped and scraping off all my skin, I proceeded slowly.  And despite wearing the most massive helmet that the island of Naxos had to offer, one that looked like it would withstand even intergalactic travel to the Death Star, I still puttered well behind Indira and Katherine, a friend we had met on the ferry from Athens.

It didn’t take long before I became separated from Indira and Kari. Basically, I was lost. On the interior of this island, the immediate surroundings all looked the same: lots of scrub brush and an occasional windmill, goat or donkey. I stopped and tried to get my bearings. I sure seemed to be in the middle of Naxos’s nowhere.

Soon enough, an older local ambled by in a Grapes of Wrathesque pickup truck. I guessed he was a farmer until I saw his load. The pickup bed nearly overflowed with a heaping pile of cheap flip flops and plastic beach footwear. My distress ceased for a moment as I wondered what he was doing carting a load of flip flops in the inner sanctum of nothing. Even I knew we were both hell and gone from a beach. The good news: at least he probably knew where the beach was.

“PLEASE,” I asked, rather begged. “Can you help me?  I am lost.”  I let the moped fall down to the ground and removed my battlestar galactica helmet. Then, moving slightly closer to him, I pantomimed my confusion about the roads with one hand and with the other, held out the business card of the pension where we were staying. It was the closest thing I had to a sign pinned to my shirt saying: “If lost, please return to the Iría.”

The flip-flop peddler, muttering in fast angry Greek, gave me a hostile look and waved me away. I followed him pathetically, holding out the card and pleading with him and telling him my situation.  We had an exchange — I guess, and while I couldn’t understand the flip-flop man, I imagine this is how we communicated.

Flip Flop Peddler: “Stupid tourist. Why are you bothering me? You think we owe you now because tourism is the industry that has overtaken the old ways? Overtaken and crushed tradition. Sure, I now have my flip flop empire, but I have to cater to idiots like you. You can’t be so demanding when you’re lost — can you?

Me:  “Please, kind sir. Please help me. I realize I am ignorant and do not know your language or the way around your beautiful island. Did I mention that you have a lovely line of flip flops?”

Flip Flop Peddler: “Why don’t you learn a little geography or carry a map with you? Get out of my sight.”

At least he pointed in a direction that possibly was the way I needed to go. He then shooed me away with a final look that said, “Oh, and by the way, you look ridiculous in that Battlestar Gallactica helmet.” 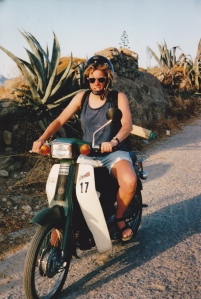 Born to be wild

Continuing his rant, he then left me by the side of the road just like a useless piece of paper  (e.g. the business card of the Iría.) Feeling like one of the mangy stray island cats, I stood by the road dejected.

Eventually I found Indira and Kari, but my relief was overshadowed by the disillusionment that my business card GPS system had failed.