One of Leiden’s many canals.
© Stephanie Glaser

“Overgeven.” It’s a Dutch verb that translates as: “to vomit, barf, spew, puke.” It covers pretty much every way to expel your insides. And, really, it is one of the most effective verbs in any language, because when pronounced properly with a “guttural g,” the word sounds like what it is.  A global onomonopia. The result, indeed, sounds like heaving or at least clearing a stubborn popcorn kernel out of one’s throat.

I learned this term and used it several times after my mom came to visit me in Leiden, The Netherlands, where I was studying for a semester in college. Unfortunately, on her first day in Leiden, my mom had to “overgeven” in public.

Judy seemed fine when I met her at Centraal Station in Amsterdam. We enjoyed some of the sights, and then to be easy on her, I took her back to Leiden, which was about a 30-minute train ride away.

By no means a rookie traveler, my mom wanted to power through the day without a nap. We went to eat a late lunch at one of Leiden’s famous restaurants, Annie’s Verjaardag (Annie’s Birthday), which has a floating terrace on the water of one of Leiden’s canals where the Old and New Rijn Rivers meet. 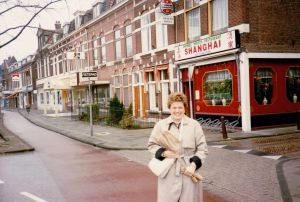 Of course, jet lag hits whether you want it to or not, so my mom began feeling its effects while eating at Annie’s. We left shortly and caught a city bus. Soon, the perfect storm of jet lag, motion and undigested food started to churn Judy’s GI tract.

“Steph, I’m feeling quite nauseous, and I really need to get off this bus.” Those were words I did not want to hear, but clearly after looking at the pallor of my mom’s skin, I knew getting off the bus was imperative. Judy looked a bit like the color of my favorite Dutch cheese, gouda (which you also pronounce with a “guttural g”)

We were on Breestraat, one of the busy streets in the downtown area. I was hoping the fresh air would ease the nausea, but my mom informed me of the inevitable: she needed to throw up. The only receptacle, that seemed somewhat reasonable, was the nearby canal. Lots of water and a wall to lean over were essential criterion at that point. We hurried across the street. “Hold it, Mom until we get to the canal!”

Judy kneeled and slumped over the short wall. The overgevening began. “Mom, are you okay?” I asked. She gave me a sort of feeble nod and then continued to heave into the canal.

Standing by her side, I looked around. As Judy steadily “tossed her cookies” (my grandma’s expression), I noticed a nearby couple clearly trying to have a passionate moment. The romantic mood was definitely interrupted if not terminated. Originally, I thought the canal may have been a more discreet location. However, its cement walls and the water amplified what sounded like an angry male sea lion challenging other bulls during mating season.

The couple tried to ignore the Sea World soundtrack, but soon they quit their embrace and settled for holding hands together. Eventually, they let go of each other’s hands, and then raised their own hands to their foreheads to shield the setting sun to get a better look.

Judy finally felt better and we made it back to my apartment, where she went to bed immediately. The next day, my mom was great sport as I retold the story with sound effects to my roommates.

That evening, the story prompted us look up “barf” in a Dutch dictionary. To our delight, we found “overgeven.” Having studied and practiced Dutch for several months, we all knew how to make the “guttural g.”

Consequently, our entertainment for the rest of the evening involved pronouncing this useful verb and creating various scenarios with which to use it. Again, Judy has a great sense of humor and took the teasing well, putting up with our juvenile antics. She even clarified certain details of what was to become an infamous story.

To this day, Judy still endures hearing me retell the story entitled, “Overgeven op de Kanaal” (Vomiting on the Canal)