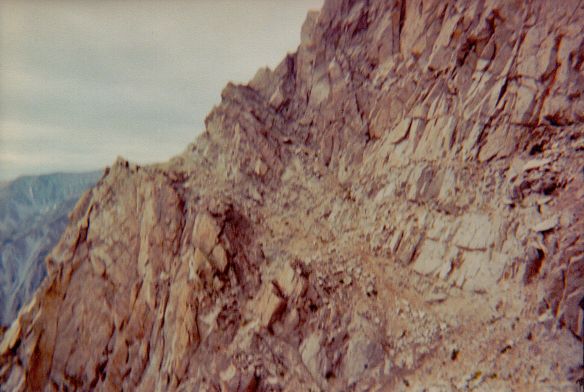 The trail meant only for hooves.
© Stephanie Glaser

As I looked back at the mountainside “trail” I had just clung to and shimmied along, I decided that it was meant only for hooves — either hooves of mountain goats or hooves of some demonic creature. This was the “Hike to Hell.” At certain points, the path just blended in with the crags and ridges of the mountain and appeared to be completely sheer.

While making my way, I hugged any jutting rock cluster, trying to ignore the fact that when small rocks became dislodged and fell, you did not hear them land. Occasionally, you would hear one skitter down the side for a few feet and then there was nothing but silence.

I don’t consider myself an extreme sport enthusiast. I love adventure, certainly, but if it means potentially facing death or “seeing the lights,” forget it. This climb was supposed to be an easy one. Mt. Princeton in Chaffee County, Colorado, is even considered to be one of the “cake walk” 14ers to scale.

A 14er is a mountain that is 14,000 feet or more in elevation. These mountains are abundant in Colorado. In fact, people make a hobby out of climbing some or all 53 of them. My friend Columbine is one of those people. She asked me in July, 2001, if I wanted to give it a go. I had climbed one 14er before, Mt. Bierstadt. And, truthfully, you feel like a badass after you climb one. Consequently, I invited my sister, Suzanne, and brother-in-law, Jason, to come along.

Because you do not want to be stuck on or near the summit of a 14er in the dark, an early start is number one on the checklist. Another reason to get up and get down early is that storms typically roll into Colorado every afternoon during the summer and you want to avoid lightening. Just by being on the side of a massive geological landmark, you are more exposed and vulnerable to a lightning strike. However, since Mt. Princeton was only 20 minutes away from where we all lived, we didn’t have to start obscenely early in the a.m.

When embarking on this type of hike, it’s important to be in good shape, have good shoes and a positive attitude. The latter is probably the most critical. Little did I know that my positive attitude would be crushed. Ultimately, however, I guess I was lucky that my attitude was the only thing that was crushed that day.

The three of my mountain climbing mates, who had already done the standard Princeton climb, decided to take the more challenging backside route up. I begrudgingly agreed to this plan.

The hike was pretty relentless, but I was mentally prepared for this — a 14er is a time consuming event. Typically, it takes fit people an average of six hours to climb up and back down to the starting point, the trailhead. (The trailhead of Princeton is at 8,900 ft.)

After we were above treeline (where trees no longer grow). My mental strength dwindled. We had spied a false summit — a peakish looking point that is not really the top of the mountain — and I realized we were still far from Princeton’s actual peak.

You can see that I’m becoming bitter in this photo.

Then, we had entered an area that was not only steep, but seemed awfully narrow. Soon it was clear this was going to be an epic challenge. Of course we could have turned around and gone back down, but you get to a point where you say, “hell no — we are finishing this bastard!”

Columbine and Jason took a path that was slightly above Suz and me. I just focused on leaning into the side and scooching along. A few small rocks fell from above and I looked up to see Columbine literally holding a chunk of Princeton in her arms. “Umm, I wouldn’t recommend coming this way,” she said rather casually.

Meanwhile, Suz, who 10 years earlier had experienced a nasty 25-foot fall that shattered her jaw and forearm, began to freak out. Understandably, she had developed a fear of heights. While I was hugging on to my portion of the mountain, not hearing rocks land, I tried to comfort her. “Suz, it’s just a little bit further — You’ve got it!”  Jason also tried to reassure her that we were close to a wider zone. 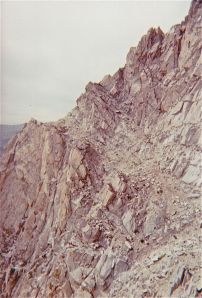 Finally, when we made it through the “Detour of Death,” as I refer to it now, the summit was within sight. Giddy, we reached the top. Victory. It was truly a glorious feeling — for a few minutes. I think, too, the fact we had made it through such a sketchy portion without any casualties was a huge reason to celebrate. However, soon the reality of having to get down the mountain set in. 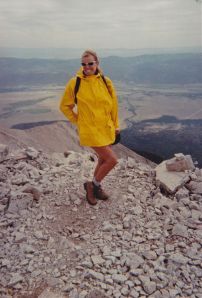 Suz celebrates our exit from the “Detour of Death”
© Stephanie Glaser

We debated about which way to follow. Columbine admitted that the route we took wasn’t the actual route she had originally wanted to take. For Suz and me, the decision on which way to go was a no brainer: the easier frontside.

Jason and Columbine wanted to go back through the “Detour of Death,” “Mountain Goat Gauntlet,” “Big Horn Sheep Bulge” or whatever it was really called. I just didn’t want to end up in “Vulture Valley.”

Suz and I, both totally over the experience, trudged our way down. Going down is actually harder on your body than going up. It’s far more jarring on your knees and feet. When we were about halfway down, Suz knew that there was a gravel road that went down to our starting point.

“Do you want to take it or should we keep hiking?” she asked me.

“We’re taking it!” I believed I hissed that statement. By then, I was bitter and just wanted the experience finished. Even when we found the road, the hiking was still endless.

However, signs of civilization began appearing — a campground, parking lot. We heard the crunching of gravel and a car approached us.

“Y’all need a ride?” Normally, if I had heard that question in a remote, desolate area, I would listened for dueling banjos and then run. However, at this point, riding with Ted Bundy would have seemed reasonable. Suz and I turned to see a boy with braces behind the wheel and another teenager beside him. They both wore khaki uniforms and hats with patches. Eagle Scouts!! Just when you need them. They didn’t look old enough to have drivers’ licenses, but that didn’t matter at all. I would have taken a ride on the back of a tricycle at that point.

They took us to the trailhead and we actually were 20 minutes ahead of Jason and Columbine. “You guys should have come with us,” Jason said. “Yeah, we found the right route.” Columbine added. It had taken us 10 hours to do Princeton.

We didn’t say anything about being rescued by teenagers. Ultimately, it didn’t matter. I was tired and still a little bitter. After arriving back home, I told my finance Kurt the saga and that we had hiked the backside of Princeton where only goats go. He responded with, “Really, the back side? Wow.” It was official. I felt like a badass. 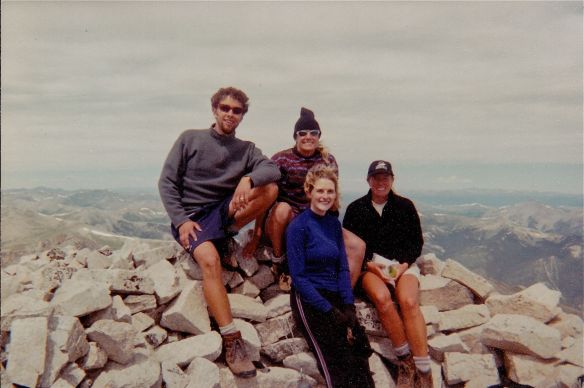 Jason, Columbine, Suz and I soak in the summit for a few minutes.

1 thought on “Hiking the “Mountain Goat Gauntlet” in Colorado”