“Mommmm!  SPIDER! Mom, Come PLEASE!” My five-year-old daughter Kasey yells from the bathroom. Expecting to see a huge bulbous glossy black widow, I mach-5 it to the bathroom. “Where?!!” I’m looking for one to be dangling from the ceiling or clinging to the toilet. “Where, honey?”

Kasey points to the base of the bathtub at what looks like a tiny clump of newly sheared whiskers from Kurt’s Norelco shaver. It is a spider — a really miniscule spider. “Mom, KILL it!!” Kasey screams while she simultaneously holds my leg and peers down at the monster.

“I think we’ll let this guy go.” I reach down with a tissue to gently lift the little spider up and then I head (with Kasey still clinging to my leg) out to the back door to free him in our Colorado yard. “Mom don’t touch it!!!” 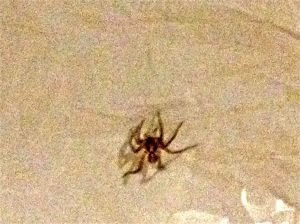 “It’s okay, Kase, this little spider won’t hurt you.” She looks at me raising her eyebrow in a manner that says, “That’s not what you used to say.”

True. I, alone, have made my kids completely terrified and paranoid of spiders. The smallest spiders even freak out Eddie, my seven-year-old son, who will caress and pet any slimy worm or leech.

I’m blaming it on Australia. When you live in a place like Australia, even if it’s just for one year, you need to treat every creature like, ultimately, it can shut down your respiratory system or paralyze part of your body while the rest of you suffers in heinous pain.

American writer Bill Bryson has written brilliantly about the dangerous creatures of Australia. From his 2000 book In a Sunburned Country:

“[Australia] has more things that will kill you than anywhere else. Of the world’s ten most poisonous snakes, all are Australian. Five of its creatures — the funnel web spider, box jellyfish, blue-ringed octopus, paralysis tick, and stonefish  —are the most lethal of their type in the world. This is a country where even the fluffiest of caterpillars can lay you out with a toxic nip, where seashells will not just sting you but actually sometimes go for you.  (6)

Bryson also accurately points out that Australians are certainly “no worries” about all this danger. When an Australian friend tells him that brushing up against a bluebottle jellyfish “might be a bit uncomfortable,” Bryson describes a revelation about Aussies.

“It occurred to me that Australians are so surrounded with danger that they have evolved an entirely new vocabulary to deal with it.” (17)

While Bryson already has covered this subject, I will add some anecdotes to support the idea that Australians are completely unfazed by their toxic creature tally.

Before moving to Adelaide, Australia, I priced and compared plane tickets to fly the whole family Down Under. I called Virgin Australia and had a lovely conversation about Oz with Shantel, a ticket agent. After briefly discussing ticket prices, I then shared with Shantel, who was based in Brisbane, my concerns about the box jellyfish — the world’s most toxic creature. Her reassurance:

“The surf lifesavers keep a good look out for them, and if they see too many, they’ll clear the water.”

Seriously. That is what she said. What I want to know:  How many is too many of the deadliest creature on earth? Also, Aussie surf lifesavers are truly badasses, but come on! I was a lifeguard and, geez, I would not immediately spot a transparent baggie with clear tentacles of extreme death. Just one of these creatures can shut down the respiratory systems of countless unfortunate swimmers.

On another occasion, I chatted with an Australian from Sydney who was working in a coffee shop in Buena Vista, CO. I asked him about the funnel web spider, “Oh they’re everywhere,” he said. “When I was a kid we used to take sticks and poke them in the holes where they lived.” So he and his friends would purposely piss off the deadliest spider in the world (and he was laughing about this!)

He did, however, seem mildly concerned about sharks. He told me that before he moved to Colorado, it had been the worst shark attack season off the coast of Sydney in many years. Yet, he also, during this period, was learning how to surf. He admitted he was paranoid because while stationed out on his surfboard, he saw a silhouette of what he thought was a shark. However, he then realized it was just his shadow. “Ha Ha Ha” — laughing again.

Aside from any snakes and crocodiles, the land creature I least wanted to encounter in Australia was the Huntsman spider. While not deadly, the Huntsman, a cousin of the tarantula, is large, creepy and fast. My friend Indira, who lived with her husband Sean and daughter, Avani, in Hobart, Tasmania, told me about an instance where she actually put a mixing bowl (not a glass) on the wall to catch one and then ultimately set it free outside.

The most troubling news about the Huntsman is its clinging reflex. Apparently, if it decided to  descend on your arm, and you were to discover it and then vigorously shake your arm, the Huntsman would vise grip you.

The more you shake, the more it wants to stay on. I also heard a rumor that the Huntsman spiders are actually listed as a traffic hazard in some parts of Australia. This is because they, apparently, like to nestle in upturned windshield visors. You can imagine, then, the resulting reaction when someone pulls the visor down on a sunny day. How could an accident not happen? I wonder if there is any data on the number of drivers experiencing heart failure upon having a Huntsman land in their laps.

I took in all this information before we left for Australia. And it’s not like we don’t have poisonous creatures in Colorado.  For example, Kurt, the kids and I saw a dead rattlesnake on a dry dusty mountain road.

Also, one morning while entering the bathroom, I actually turned the overhead light on — many times I just use the glow of the nightlight. Through bleary eyes, I could see a black bulge on the side of the toilet. After focusing, I saw it — a black widow. I instinctually avoided one of the biggest fears of probably EVERYONE: sitting bare bottomed on a venomous spider.

Small spiders do not bother me, and I will leave them alone, or try to relocate them outside (it could be one of Charlotte’s kids, for crying out loud).

While living in Australia, however, I pulverized any spider I saw and I thrashed webs until they looked like a single piece of used dental floss. (I actually feel like the verb “pulverize” was created just for killing deadly Australian creatures.)

Red backs, part of the venomous widow family, dominated the spider scene in South Australia.  After seeing a significant web on the underside of a plastic tricycle that Eddie was about to ride, I flipped the toy over. There it was — a red back. I obliterated the creature. After that, no spider was safe in my presence (although I would definitely have been at the mercy of a Huntsman.) 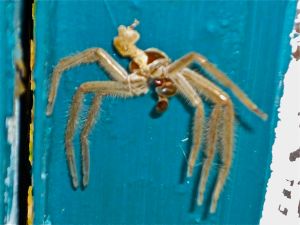 So whenever my kids yelled “spider,” I would pulverize and thrash. Fortunately, we never saw a funnel web or a live Huntsman. I snapped a photo of a dead Huntsman on a park bench in a town along the southern coast of New South Wales, however. We also had a large unidentified spider that lived in a tree in the backyard. I was not going near that thing.

Ultimately, however, I believe it is my violent reaction to the smaller spiders that has turned my kids into sobbing messes when they spy anything with eight legs. Who knew there was yet another way to scar one’s children?

8 thoughts on “Pulverizing the Itsy Bitsy Spider in Australia”