The journey has begun. The anticipation is there. It won’t be long before you arrive in an exciting new location or an old favorite. Speaking of arrival, here comes the drink cart.  Even better — the alcohol is free!

It’s a perfect time to celebrate, so why not have another and another and maybe another after that? You’re not driving. Plus, your flight is fourteen hours; you have a lot of time to kill. So, it’s tempting to get the party started and to keep drinking.

Of course, there’s nothing wrong with celebrating and drinking in moderation on a flight. And perhaps you know what you’re potentially in for, having already experienced hangover hell and feeling like complete crap at one point or another.

But remember, you may not have experienced this while in a confined space where you don’t have quick access to fresh air, toilets or even your own pillow.

Not to mention you may have to endure this state for several more hours with crying kids and grumpy passengers who are over the flight.

Here are some suggestions for avoiding this scenario.

Don’t underestimate the small sizes of the liquor bottles.

Those cute airline bottles are just so little. Consequently, it’s easy to think of downing several. But like sand in the hourglass, they add up eventually.

And actually, according to Kurt Glaser, who bartended for 13 years and has experienced a 28-hour-plus journey with multiple layovers, the size of airline liquor bottles is the equivalent to 1.7 ounces (50 ml) rather than the one ounce (30 ml) of a standard shot.

“It easy to think you’re drinking the same amount that you are in a bar, but it’s really a little  bit more — like a shot and a half,” says Glaser. He recommends drinking the liquor with ice as is usually served with an inflight drink. “The ice will fill up the glass and make you feel like you’re drinking more plus it will melt and dilute the alcohol.”

Avoid getting wasted before you get on the plane.

Avoid loading up on alcohol at the airport or arriving on the plane already drunk or impaired. This can make for a brutal flight.

Raquel Campo* flew back to the United States from Africa via Amsterdam. While she was in Amsterdam, she ventured into the Red Light District and sampled some hashish. When she got to the airport, not only was she in an altered state, but also she was paranoid that she would be detained at security and actually had a difficult time answering questions.

“I almost just started crying. “Finally [the security guard] just let me through. So I got on the flight; then I proceeded to just overdrink. By the time I arrived in the states, I was throwing up into the barf bag.

I was thinking: ‘This will at least calm me down if I just have a few drinks.’ But it didn’t. I was sitting next to families. I tried to balance it out and it didn’t work in my favor. It was awful. I was hurting the whole next day.”

Her ordeal was not over since she was detained at US customs.

“When I got off the plane, because I had come from Africa, originally, they wanted to spray me down with this stuff. So I was in the back in this little room and I was just so sick. They were spraying my feet and going through my bag. It was bad.”

*(not her real name) 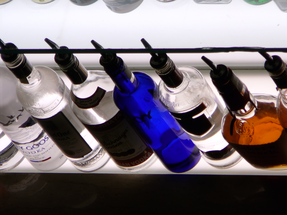 Be careful of mixing alcohols.

The drink cart comes around first and then, not long after, at dinner, the wine service comes by. Again, very tempting, but mixing can be the ingredients for a tough recovery. While the evidence isn’t in that mixing drinks causes more intense hangovers, for some reason, there is a higher tendency to drink more while mixing beverages.

Be aware of congeners.

During alcohol’s fermentation process, toxins and impurities called congeners result as byproducts. Congeners, which can also be added to the alcohol, affect taste, smell and the color of alcohol. Darker drinks typically have more congeners (e.g. whiskey, dark rum, red wine, bourbon). Consequently, these drinks may cause a worse hangover because congeners contribute to inflammation, which, in turn, leads to a headache.

Sometimes travelers don’t drink as much water because they forget to do so, they dumped their water out at security or they want to avoid using the aircraft’s bathrooms.

Drinking less water and more alcohol can lead to pain. Alcohol definitely dehydrates. According to Liesa Goins, a medical journalist for WEB MD, “for every alcoholic drink you have, your body can expel up to four times as much liquid.”

The staff of Japan Airlines has probably seen its share of passengers consume too much sake. In fact, JAL’s website offers advice to passengers so they will experience “a comfortable enjoyable journey”

One of the top suggestions:

“Proper eating and drinking will enhance your comfort both during and after your flight. Avoid eating or drinking too much. Be careful not to drink a lot of carbonated beverages. Drink alcohol in moderation. Drink water and juices frequently during your flight.”

Tim Markel, who often travels for his salsa business, maintains he has made the mistake of consuming alcohol in the airport before a morning flight. “In the morning what you should be doing is drinking water and eating breakfast.”

“You don’t need to give up drinking whiskey on the rocks, just eat and drink water, too,” he adds.

Remember you’re essentially drinking in Denver, Colorado, the “mile high city”  (or at least at that altitude)

While you are enjoying a few drinks, you also are breathing in less oxygen.

Airplane cabins are pressurized with compressed air that simulates an altitude typically ranging from about 5,000 to 8,000 feet. With this increase in altitude comes a decrease in available oxygen. At 5,000 feet, which is close to the elevation of Denver, CO, you’re breathing 17 percent less oxygen.

Having worked at a bar in a mountain town at 7,000 feet in elevation, Glaser has witnessed many drinkers who are affected by a higher altitude and less available oxygen.  “For every 1,000 feet, you lose three percent of your oxygen. So, I see fatigue, frustration and irritability in people who are coming from sea level or lower elevations. People get headaches and then they are grumpy.”

Glaser always warned new customers about the effects of drinking at a higher elevation. “I always recommended to visitors that they have a glass of water for every cocktail, beer or wine they drink.”

One other point to keep in mind on an airplane is that the humidity level is low in the cabin. This also can lead to dehydration.

Try not to drink the entire flight or late in the flight.

When you arrive in a new place where you need to locate lodging and figure out systems like public transportation, the last thing you want to feel is double disorientation. Navigating a city while being under the influence is generally a bad idea.

Annie Ruiter, a world traveler who plans events for New Belgian Brewery, enjoyed free drinks during an entire flight from New Zealand to Thailand. When she and her friends got off the plane they went straight to their hotel room and arrived there around 7 a.m. Their intention was to get settled and then do some sightseeing.

“We were so drunk we barely got to our hotel. We had to sober up and take showers. The guy that I was traveling with slipped on the bar of soap in the shower, and it was one of those bathrooms with the tub and the toilet right next to [the shower]. And he went to catch himself and put his hand in the toilet and broke his two middle fingers within two hours of getting off the plane drunk.” Ruiter and her friends had to get the injured friend to a hospital.

“It was bad. We were all super drunk and it was 7 a.m. and we planned our flight thinking that we would get off the plane at like 5 a.m. and then we’d have the whole day to chill and travel and get situated. Our checkout time was 10 a.m. that day so we got there at 7 am-mish. Within minutes, there were broken fingers and we had to be out of the hotel.”

Definitely the day did not start out as the travelers had intended.

“We were out on the street and one guy was in a Thai hospital. It was epic.”

Ruiter’s advice: “Don’t get off the plane drunk to hungoverness and think you’re going to start the day.”

Remember, some of us are not as young as we used to be.

Matt Reavis was in his early 20s when he flew with college friends from Colorado Springs to Anchorage Alaska via Dallas via Seattle on a very cheap Priceline ticket. The flight from Dallas was delayed before takeoff, so Reavis and his friends had to remain in the plane on the tarmac. Because it was July 31 in Texas, it was uncomfortable. “It was so hot,” Reavis says. To keep passengers from getting too upset, “a stewardess kept feeding us drinks, and we weren’t turning them down,” he adds.

When the flight finally took off, Reavis and his friends kept drinking. “We were so drunk we thought we had to keep it going.” Ultimately, they fell asleep on the last flight from Seattle to Anchorage. “We were a mess.”

When they got off the flight it was 10 p.m. so they went back out.

Reavis, now a high school athletic director, says part of the reason he recovered fairly easily was because he was in his early 20’s. “Now I’d probably take an Ambien and pay the five dollars for inflight TV to entertain me rather than pay $5 for a drink,” he says.

Ultimately, many travelers avoid alcohol all together because of the various reasons described above. To many flyers who have been there and done debauchery, it just isn’t worth it anymore.