What is it with Europe fawning over David Hasselhoff? He was HUGE there in the late 1980s and early 1990s. Seriously. The guy actually sang as the headliner at the Berlin Wall on New Year’s Eve in 1989. Perhaps Germany brought “The Hoff” in to provide some comic relief after all the turmoil, tragedy and strife the wall had brought since 1961.

But no. The Germans were serious. Stationed on a crane overlooking the wall, Hasselhoff performed the song, “Looking for Freedom,” which had dominated the pop charts in Germany earlier that year. The Hoff wore a piano keyboard scarf and a jacket blinking with lights. Yep. He did. The Light Bright jacket actually took attention away from the sledgehammered, chipped, chiseled up and nearly demolished wall.

Frankly, this news event should not have been that surprising to me since the Hasselhoff had captivated Paris two years before in July 1987, and I was a witness to the phenomenon. If an American can create a French Frenzy well, then what’s to stop him from playing in a prelude to the unification of Germany. It’s almost like Hell freezing over, right? 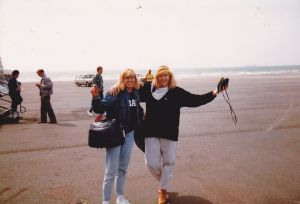 I celebrate with Deb as we land on French soil.

After saving money for a year, my friend Debbie and I traveled through Europe on our own. France was definitely a big part of the itinerary. We couldn’t wait to experience Paris, The City of Lights.

Debbie was fluent in French and while I didn’t know the language, I would ask her to tell me how to say various phrases, and I would blunder my way through them. Trying to blend in, despite the language barrier, I wanted to be French while I was in Paris that summer.

In addition to seeing the Eiffel Tower, the Louvre, Notre Dame etc., a U2 concert was added to our checklist since Debbie had seen an ad for their upcoming Paris show. The massively popular Irish band was going to play at the Hippodrome stadium.

On the metro, we ended up asking some young Parisian women how to get tickets to the show. They became our personal guides and helped us find the equivalent of a French Ticket Master.

They couldn’t have been more welcoming and friendly. After Deb and I purchased tickets, they took us to a locals’ café where we felt like part of the scene. I could not have felt more French unless I had wielded a baguette, sported a beret and mimed some moves on the sidewalk. Definitely, we felt pretty cool. When I hear criticism of Parisians being aloof and rude, I can’t disagree more.

However, ultimately, Deb and I certainly were still tourists. And perhaps it was because we weren’t far out of our 1980s American teenage years that we stopped by one of Paris’s most famous malls, Les Halles. Checking out the fashion, of course, was a must. That was a very French thing to do in our joint opinion.

When we arrived, commotion dominated the halls of Les Halles. Was there some sort of epic clearance sale? Why did we hear screams and cheers? What was the French Frenzy all about? It was about David Hasselhoff who, at the time, played former Green Beret and crime fighter Michael Knight on the show “Knight Rider” and “KITT” his talking car sidekick. Really? They brought the car over to France? Parisians were screaming for David Hasselhoff and his cheesy talking car. 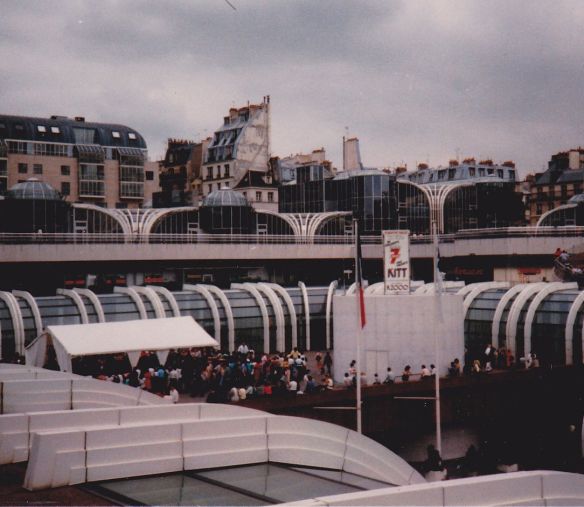 Frankly we were shocked. Plenty of people in the US watched “Knight Rider,” but the show was kind of a joke — at least to most people I knew. A guy with permanently pouffy hair who talked to his car and shut down evil menacers (actually, the hair looks bad now, but at the time, it was probably pretty cool.)

Granted we chose to visit a mall, but Deb and I still thought we could have a Parisian day, and did not expect to thwarted by Michael Knight Mania. Consequently, we cut our trip to Les Halles short.

My perspective on the French changed that day. My impression was never that they were rude, but that they had incredibly bad taste in music. Always a bit intimidated by their chicness, I had been in awe of the French and their beautiful language.  However, the intimidation factor plunged after seeing the spectacle at Les Halles.

Ultimately, I guess I shouldn’t be as harsh toward the Hoff either. In fact, he really has the last laugh since he acted on and produced “Baywatch,” which was the most widely watched show in the world in 1990s and largely responsible for the reputation of Americans as being vapid, blonde beach bimbos.

I remember being shocked once again by Hasselhoff’s appeal when I saw footage on “60 minutes” of a family in a remote jungle village in Southeast Asia paddle home and crank up their generator so they could tune into “Baywatch.” They probably used all of their electricity for the week just to see the show. 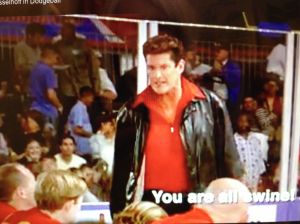 Despite my misgivings of him, one thing that I do respect about David Hasselhoff is that he can make fun of himself. He shows up in “Dodgeball,” a comedy about the owner and members of an underdog gym who compete in a world Dodgeball Competition. Hasselhoff plays himself as the coach of the German national dodgeball team. At one point, he admonishes the team in German for playing so poorly.

Also playing himself as his lifeguard alter ego, Mitch Buchannon, he rescues the wildly popular animated characters SpongeBob and Patrick in “The SpongeBob SquarePants Movie.” Patrick and SpongeBob see Hasselhoff running toward them in the slow motion move that is parodied directly from “Baywatch,” The show always included a random slow-mo run, typically of the bodacious female lifeguards.

Anyone who can laugh at him or herself is all right in my opinion. Although Hasselhoff really had to laugh at himself or he’d be crying after the unfortunate YouTube video surfaced of him in an obliterated state, slobbering and trying to eat a cheeseburger.

But there’s no denying he was THE requested performer at one of the most celebrated and momentous occasions in recent memory.

Another unforgettable impression Hoff has left people with is a quote about playing Michael Knight. He said his role was “a little more difficult than if you had a regularly well-written script — like, if I was going to be in, say, ‘Reservoir Dogs,’ or ‘The Godfather’ or ‘Dances with Wolves’ or ‘Lawrence of Arabia’ or ‘ER,’ I had to talk to a car.” (www.deathandtaxesmag.com)

I guess I should consider myself lucky that I was in the vicinity of this theatrical phenomenon in the City of Lights.

4 thoughts on “Travel Oops: Halted by “The Hoff” at Les Halles in Paris”