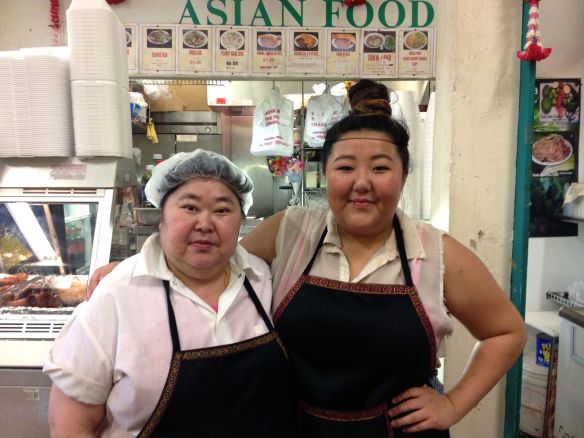 Yer and Young at Mr. Papaya in Hmongtown“

Clunking through the Hmong phrase that sixteen-year-old Young Lee just taught me, I press my hands together and lean forward, doing a sort of semi-Geisha bow to thank her mother, Yer Xiong, for my delicious and cheap bowl of noodle soup. I nudge my eight-year-old son Eddie to do the same. 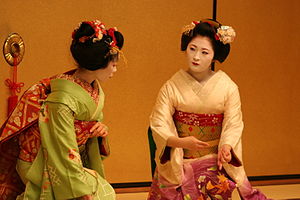 “I’m not quite sure why I just bowed,” I blurt out to Young, thinking perhaps that’s not the appropriate way you thank someone who is Hmong.

“Yeah. We’re not Japanese,” she says.

“But that’s okay,” she adds with a smile. Despite wearing a hair net, she looks sassy with her lip piercing and with her hair in a high somewhat unkempt trendy bun. She towers over her mom who, wearing a more hard core hair net resembling a shower cap, remains silent.

Over standard white button down shirts, they both wear matching black aprons with Southeast Asian style embroidered trim. Young has fashioned her white shirt into a ripped sleeveless look, and she wears a hot pink tank top underneath. It is the same hot pink as the smart phone she had been texting on earlier during her brief break. 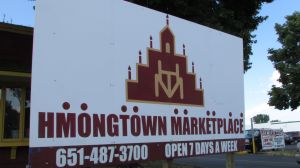 Young and Yer run and cook at Mr. Papaya at St. Paul, Minnesota’s Hmongtown Marketplace, where I took Eddie for Culture Day.  A monthly event, Culture Day involves taking my kids to an ethnic market, store or restaurant to have them experience cultures besides the white outdoor enthusiasts and good ole boy ranchers that dominate the population of our hometown in Salida, Colorado.

Since we were visiting my parents in Minnesota on summer break, Hmongtown Marketplace was the perfect place to go. Around 200 vendors offer a range of Southeast Asian goods (primarily Laotian), ranging from electronics, DVDs, clothing, trinkets and beauty products to fresh produce. The area, which is open seven days a week also houses space for a farmer’s market and a food court. 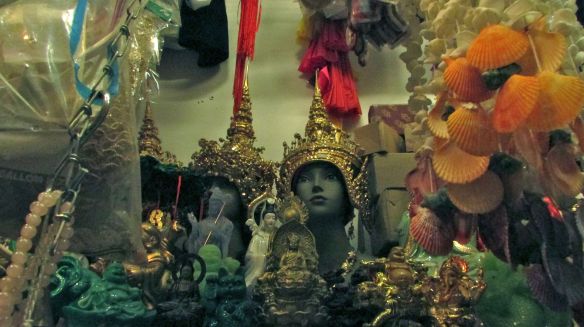 “It’s like another a step into another dimension in another country,” says Ying Xiong, the general manager of Hmongtown, in an informational video about the marketplace. “It’s a five minute trip outside the US.”

In the same interview, Ying also explains the vision of Toua Xiong, his father and the founder of the marketplace.

“Growing up here and running away from [Laos] and then war it’s been really hard. So he’s just really passionate about creating something that the Hmong people will have that they can call it theirs,” Ying maintains.

“There’s Chinatown, Vietnamese Town, Thai Town and other towns. And for the Hmong people, we don’t have a country. We don’t have a land right now that we can call our own. But in America, we can build a Hmongtown and have all the Hmong population centralized here so we can feel like we have something we can call home.”

A little bit about the Hmong 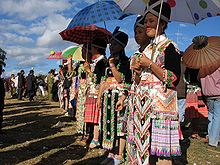 The Hmong, often called “hill tribes,” are an ethnic minority in Laos, Vietnam, Thailand, Myanmar and Southern China. Most of the Hmong people who arrived as refugees and settled in Minnesota originally came from Laos. 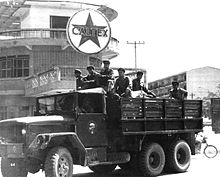 The Pathet Lao in 1973, Vientianne, the capital of Laos.

After the US military left Southeast Asia in 1973 and the civil war in Laos ended in 1975, the Hmong faced harsh consequences from both the Communist government of Vietnam and Pathet Lao, the Communist movement that essentially toppled the existing Royal Lao Government during the civil war in Laos. Many Hmong escaped to Thailand and lived in refugee camps for several years.

While the Hmong first came to the US to seek political asylum in 1975, most of the Hmong who settled in Minnesota began arriving in the 1990s when a US-backed attempt at repatriating them from the camps in Thailand back to Laos failed. 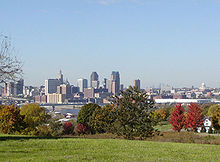 Using the most recent demographic data from the 2010 census, The Hmong American Partnership, reports that 260,076 Hmong people reside in the US and the Hmong population in Minnesota is 66,181. Only California has more Hmong residents with 91,224. As far as cities go, the Twin Cities metro area has the largest Hmong population (64,422) in the world.

Arriving in the early evening on a Saturday, Eddie and I wandered around the marketplace. Indeed, it actually felt like we were in Southeast Asia. Traditionally, the Hmong have not had a written language, but we saw signs that read: Txhiav Plaub Hau (Twin Cities Beauty Salon) and Haus tsuaj Yej Dawb (Drink Free Heal Tea Forever Strong) and Chaw tua nkees (L.Y. Game and Much More) 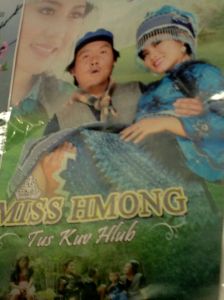 Miss Hmong — Clearly, she is special.

Videos and CDs from Laos were available and on display at almost all shops, which made sense since people often miss the pop culture of their home country. Beautiful Asian women in conservative attire with high-buttoned shirts, prim dresses and jackets graced the covers of several video cases.

A large poster advertising the video, “Miss Hmong,” dominated one shop. While I didn’t know the story, based on the main image, Miss Hmong, dressed in an elaborate blue silk embroidered costume with a headdress that looked somewhat like a lampshade was being carried by a guy who looked like he was either in the Laotian version of the Eagle Scouts or he was in a lower socio economic group. The peasant-looking guy seemed to be rescuing Miss Hmong, who was all smiles — a rich girl meets poor boy story, perhaps. 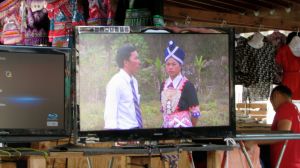 On one flat screen TV, a soap operaish show, accompanied by what sounded like actual Laotian opera, played in the background. From what I could gather, the storyline involved accountant or a computer tech guy, wearing a white buttoned up shirt and tie, trying to console a troubled princess or dancer in her traditional attire. Her black headwear was intriguing — it was in the shape of a turban with silver trim in an x formation. The tech guy and the princess were on the outskirts of the jungle with seemingly no solution, whatsoever, to the immediate conflict.

“Mom, this music is kind of annoying,” Eddie said. Actually, I wasn’t necessarily a fan, either. We definitely weren’t used to the Southeast Asian singing. “It’s just different to us, but it’s popular here and in Laos.”

After turning a corner, we saw two older men kneeling on the cement floor to tune an Asian guitar. They glanced over at us, and then looked back at their instrument. I was hoping they would begin playing, but they seemed intent on getting the strings tightened just right. 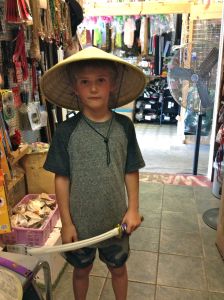 At a nearby gift shop with heaps of cheap plastic toys, Eddie selected a samurai sword that was made in China. “Can this be my souvenir, Mom?” I had promised I would get him something that was Hmong.

Technically, I figured it could work since, for many centuries, China was the home for Hmong people. While many Hmong left their homeland in the 1800s for Thailand, Laos, Myanmar and Vietnam, Southern China has eight million Hmong residents. 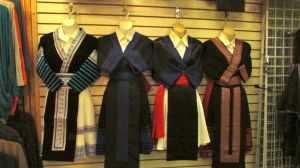 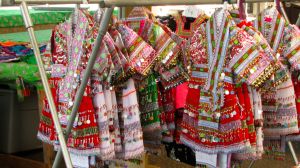 The robes looked a bit like smoking jackets. In fact, one resembled an Asian version of something Hugh Hefner may have worn back in the day. Stores also displayed what appeared to be more ceremonial type robes with multi colored fabric, embellishments and bling with plenty of gold and silver accessories. I was amazed at the selection available for children. Along with traditional items, stylish maxi sundresses, cute tank tops, matronly knit cowl neck shirts and garish Vegas style t-shirts also were available.

Back at the food court.

For a Saturday summer night, it is not very busy at Hmongtown. Eddie and I amble over to the relatively empty food court. Looking at standard images of the menu items, I wonder if anyone has started an Asian food stock photo business. 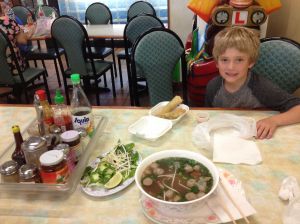 At one food stall with a great name, Mr. Papaya, we order two bowls of the traditional Vietnamese noodle soup, pho, which come in heaping servings for a very reasonable price.

“I’m going to eat this whole bowl,” Eddie tells me, grabbing chopsticks. I am proud that he knows how to eat with the wooden utensils and doesn’t think it’s strange. We sit down at a long table and I notice we are the only Caucasians in the dining area. An older woman mops up around Mr. Papaya. A teenage girl takes a moment away from cleaning to text at the end of our table. 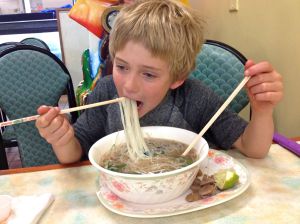 Eddie goes to town with his pho

I strike up a conversation with the girl after she finishes texting. She introduces herself as Young Lee and her mother is Yer Xiong.

Telling Young I want Eddie to experience Hmong culture, she tells me there is another Hmong area, Hmong Village. She suggests we visit.

“But we are the oldest Hmongtown,” Young informs me. 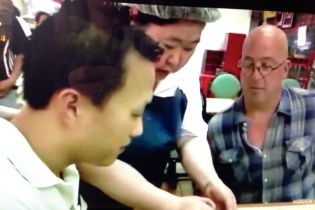 Yer serving Andrew Zimmern on an episode of “Bizarre Foods”

I have to admit that I first heard about Hmongtown after watching Andrew Zimmeran feature the marketplace on “Bizarre Foods.” In fact, I think Yer Xiong actually serves him a bowl of bitter bamboo soup in the episode.

Young tells me a bit about the area with the expected exuberance of a teenage girl. A few “likes” pop up throughout her commentary.

After getting coached by Young, I thank her mother in Hmong for the pho. Yer Xiong doesn’t speak any English, so I ask Young if I can get a photo of her and her mother.

“Yeah.” She looks surprised and then tells me, “Some people were in from New Jersey —they were going to Somali town, too, and they took our picture.”

“You should go to the Somali market,” she advised.

Young organizes the photo session, enlisting a young man who has been milling about the food court. The way she directs him leads me to believe he may be a cousin or relative. Wanting to be included, Young’s younger brothers and sisters zip into the scene.

“No. It’s just the cooks,” Young states while trying to shoo her siblings away. 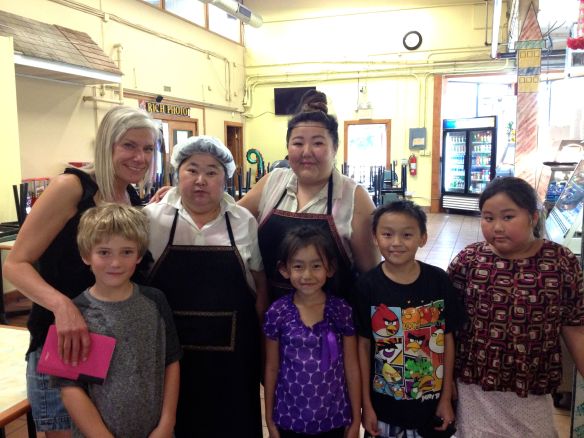 Eddie and I stand with Yer, Young and her siblings.

Then we all take a photo with the cooks. After “thanking Young and Yer Xiong for the pho and photo, I see, out of the corner of my eye, the Japanese waving cat Maneki-neko resting on a the counter top of another food stall. Maneki-neko looks like it’s waving goodbye, but actually according to Japanese symbolism, the cat is beckoning people to come over. Either way, the Asian icon is good luck and is a fitting reminder that we have been welcomed in Hmongtown. 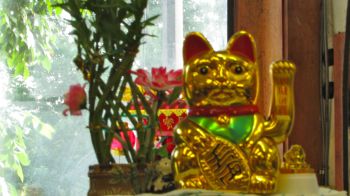 Maneki-neko beckons us over.

6 thoughts on “Hmongtown: Taking a Trip to Southeast Asia in St. Paul Minnesota”