My new nemesis, which is actually a blue run.

Steph, MRI looks pretty bad, see attached. We will do referral to ortho. Keep icing, elevated. Might do better on crutches if you are not already as there is a bone contusion.

This is the e-mail message I received recently from my doctor, Matt, who typically makes me feel neurotic during my regular checkups or my kids’ checkups. In his laid back way, he’ll look at me quizzically and say things like:

— “This is some type of viral condition, and it really just needs to run its course.”

— “Sometimes kids throw up for no real medical reason.” — “Yeah, I don’t think you have anything to worry about.” 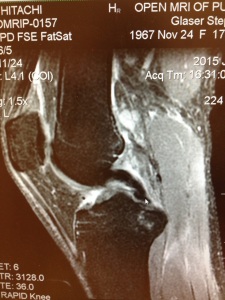 My MRI results. I still don’t really know how to identify issues, but my ACL is supposed to be in the image and it’s not because it’s completely torn.

He’s a very good doctor and has a great sense of humor, but sometimes you feel like a hypochondriac when you leave his office. So the phrase “looks pretty bad,” in his e-mail, indeed, alarmed me. Then I looked at the MRI results of my knee, which stated I had….

Whoa!! A bone contusion? (which is really just a bruise) That sounds hard core. And all that resulted from a fall on a ski run named…Toddler?

On Toddler: A nine-year-old swooshed past me spraying a little glaze of powder as I laid in the snow on my back with my legs up in the air, boots and skis still attached. The little twinge I felt in my left knee moments earlier after I landed was not a welcome sensation. I had done something to it. And next, I did what most other skiers who had only made one run of the day would do. I got up, skied down leaning on my right leg and went right back into the chair lift line.

Sitting down as the chair lurched forward, I discovered immediately that I had made the wrong choice. While my knee seemed to be stretching by the second from the weight of my boot and ski as well as having gravity pull down on it, I knew I needed to get back to the lodge and off my skis.

To make a long story short, because I fell two days before we were scheduled to roadtrip to Minnesota for Christmas, I did not see a doctor. Three weeks went by before I mentioned to Dr. Matt (during my son Eddie’s appointment) that I may need to have him check out my knee since I had done “something to it.”

An X-ray and MRI later, I found out. And of course the question everyone asks when they see you with a knee brace and find out you need to have surgery is: How did you do it?

Now here’s the interesting part. There is really no way to make “I fell on Toddler“ sound badass. So, I could lie and drop the names of other Monarch runs and state: “I didn’t quite land my jump off Sheer-Rock-O.” That is a legitimate hardcore run that has exposed rocks and multiple protrusions. 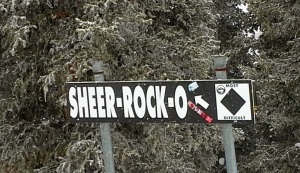 Or I could fabricate a different fall version and say, “I was ripping it up and wiped out on High Anxiety.” At least that confirms, indeed, there is anxiety involved with that run.

Even some of the other runs could have intriguing plot lines. Like, “I danced with the wrong mogul on Tango.” Or “I should have had my head examined after I launched into a 360 on Examiner.” (I don’t really have anything for LOBO or Upper Christmas Tree.) But even “Upper No Name” is shrouded in some baddassery. After all, it doesn’t even have a moniker because nothing is extreme enough for its terrain. That, at least, sounds plausible.

But I’m not a good liar and most people would know that I wasn’t hucking off Sheer-Rock-O or catching intentional air off Examiner. So, perhaps, I could incorporate Toddler into the story and modify the tale slightly.

Again, there is no way to weave in any wickedness, so I might as well own this nice oops and say, “I fell while skiing on Toddler.”

My friend Rebecca’s daughter, Eva, posing next to my nemesis.

Update: Surgery was a success and I’m recovering with all my Terminator leg gear on, which, I might add, is pretty “badass.” 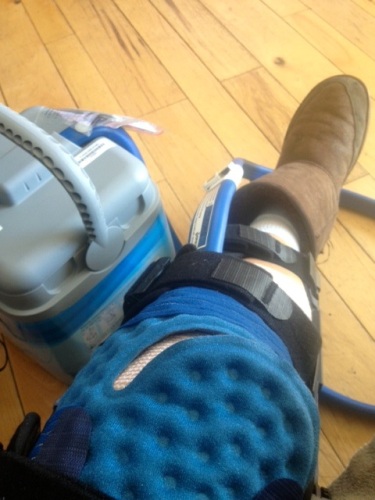 16 thoughts on “Taken down by Toddler”