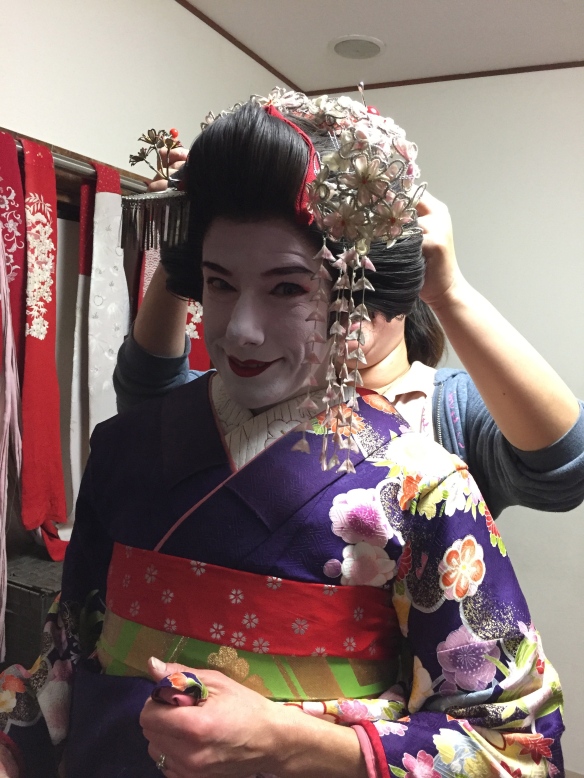 While Mariko carefully wove the delicate Kanzashi, a Japanese silver hairpin — this one featuring dangling fabric cherry blossoms — into my voluminous, smooth black wig, I tried to ignore the itch on my nose. I didn’t want to smear the thick white makeup she had applied 45 minutes earlier. My eyes also stung slightly from the heavy black eyeliner, but again, the discomfort was worth disregarding so as to avoid messing up Mariko’s work. She next pulled tightly on the green and gold silk obi, securing the long wide fabric sash around my waist. I looked down at my feet in the split-toe ultra bright white socks as the edges of my pink satin lined, purple floral kimono skimmed the floor. Finally, Mariko stepped away and smiled. My transformation was complete. Pursing my red heart-shaped lined lips, I finally turned to look into the full-length mirror. I was a dead ringer — for a drag queen.

I was going for geisha. Exceptional artists, entertainers, conversationalists, musicians, dancers, titans of tea ceremonies, as well as occasional tolerant minders of drunken businessmen, geishas are the face of Japan — at least the Japan from a foreigner’s perspective. In the US, it has been this way for decades — at least since Japan re-entered the American imagination after World War II. For example, an illustration of a maiko (an apprentice geisha) bowling on a 1964 cover of LIFE magazine enticed readers to examine the feature story touting “restless excitement and a wealth of paradoxes set the mood of modern Japan.”

Geishas have always fascinated me, long before Arthur Golden wrote his famous Memoirs of a Geisha. Consequently, when my sister, Suzanne, and I planned a trip to Japan, I discovered through a Google search — AYA, a full-service photography and makeup studio in Kyoto that conducts complete Geisha Glamour shots — even for gaijins (gringos). I made reservations for the makeover event before we even booked lodging in Kyoto.

The dream of looking like one of the ultimate symbols of Asian beauty, I’m fairly certain, traces back to my early childhood. On a trip to San Francisco in 1969, my parents purchased a gorgeous swath of turquoise Chinese silk fabric embroidered with cherry blossoms. My grandmother, Evis, a talented seamstress, whipped it into a robe that could easily double for a frock straight from the Ming Dynasty designer collection. Apparently, I often toddled around the house as if I came off a kiddie Cantonese catwalk.

For Halloween, when I was two, I wore a red Asian jacket with black trim and a black silk tie that looked like martial arts movie attire — either that or it resembled something that Hugh Hefner would have lounged around in at his Playboy Mansion. It came with a little beret that had a long black braid attached. On top of my blonde, curly hair, the beret looked odd, like it had undergone a severe unraveling in just one particular spot. Wanting to have long dark locks, I often resorted to disguising my hair more completely with a dark brown terry cloth bath towel since it was the closest thing we had to a black wig. 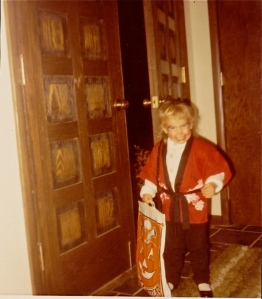 Although my outfits were really more Chinese themed than Japanese, I was groomed, practically since infancy, to appreciate East Asian apparel in general. And naturally, since Suz was the younger sibling, she inherited all the hand-me-downs.

Ultimately, however, there was something I found extra special about the Japanese kimono, which centuries ago evolved from Chinese fashion. An illustration of a family dressed in kimonos, featured in the “clothing” spread of the 1979 World Book Encyclopedia collection that my parents had bought, captivated me. Their colorful floral garments seemed not only comfortable and free flowing but also time honored.

Also, that year, during a family trip to San Francisco’s Japantown, Suz and I saw stunning Japanese geisha dolls at every gift shop in the area. The dolls were usually displayed in a glass case along with mini bonsai trees. The precisely constructed kimonos on each doll offered a reflection of the Land of the Rising Sun and outshone, by far, even the glitter of our beloved Disco Barbie’s roller skating ensemble. Essentially, I concluded the ultimate way to wear a kimono would be to assume the identity of a geisha.

Mariko and I — peace out — Batman!

Ready for the invisible box.

Doubts of becoming a graceful geisha, however, surfaced for me early during the makeover. After pulling my hair back tight and fitting it in a hairnet, Mariko applied the standard white makeup to my face, neck and shoulders. While the white, creamy coverage felt smooth, cool and luxurious when Mariko brushed it on my skin, the look it created could easily get me a gig in Central Park as a mime. All I needed was a striped shirt, suspenders, black beret and an invisible box. Or if the market for mimes was flooded, I could definitely fill in as a Joker stunt double for Jack Nicholson if “Batman 17” was in the works.

END_OF_DOCUMENT_TOKEN_TO_BE_REPLACED

An Independent Non-Discriminatory Platform With No Religious, Political, Financial, or Social Affiliations

from swerve of shore