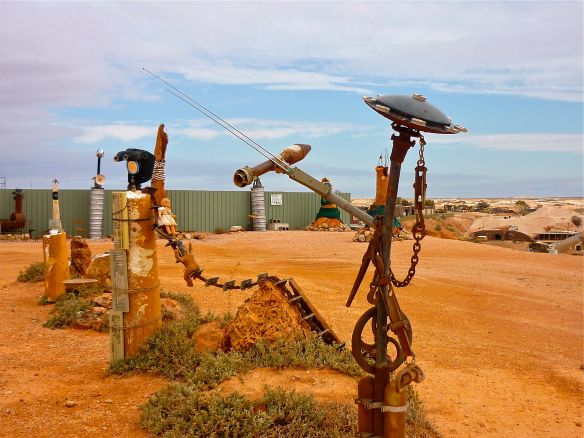 The sculpture appeared to be on loan from the “Sanford and Son” collection. Or, it could have been something ET rigged up to “phone home.” Chains, old school TV antennas, plastic baby dolls, a wokish thing, old computer keyboards, rusty tools and vehicle parts were strung together in a very random way. “Unique,” as an adjective, did not really cover it.

We looked around at more of the offerings of the free outdoor museum in Coober Pedy, South Australia, where the works were a mixture of plain old junk and art junk. The surroundings seemed to be part of the “art rubbish movement.” The theme’s main representatives were corrugated sheet metal and rust — which actually complimented the soil, the color of ground chili pepper. It was quite beautiful — in a “Mad Max Beyond Thunderdome” kind of way. 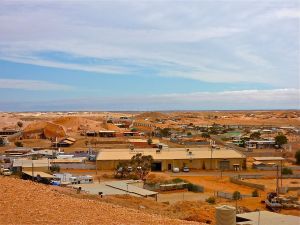 We were the only ones at the art exhibit. The docent was definitely MIA. This was something I had never seen in the United States. In fact, the entire town of Coober Pedy was like nothing I’d ever seen. It was awesome! This was fitting in nicely with an image of the adventurous Outback.

Kurt the kids and I traveled there with my parents, Ed and Judy, who had come to visit us in South Australia, where we were living for one year. When Judy asked me, “Where would you most like to visit while we’re here?” I replied easily, “The Outback and Coober Pedy.”  Judy seemed skeptical at first, but she’s a good sport and we all knew there would be nothing like it. Plus, Coober Pedy was on the way (sort of) to Uluru, which was a must-see. 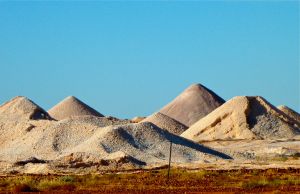 Coober Pedy is “out there,” of course, both literally and figuratively. After all, it has been part of the movie settings for all the “Mad Max movies”; it’s the opal capital of the world; it’s host to fine underground living and camping; and it’s a place, according to locals, “where people come to “disappear.” It was the perfect place to go on our first holiday in Australia.

When we arrived after a 10-hour road trip from Adelaide with all of us crammed into a minivan, we saw what most guidebooks had promised. Coober Pedy has a lunar type landscape. Huge mounds of sucked up earth and mine shafts are everywhere.

It immediately had a sort of post apocalyptic feel. You expected Will Smith to emerge from a mine shaft followed by a bunch of cockroaches and maybe Keith Richards scurrying out as well. 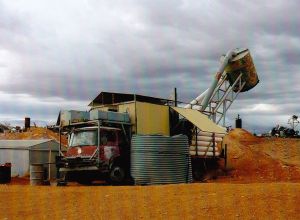 Opal miners, hoping to strike it rich, have come to Coober Pedy ever since 1915 when opal was first discovered. The area has over 70 opal fields and is the largest opal mining area in the world. According to the Coober Pedy Visitor Information Centre.

Old truck cabs with jerry-rigged long pipes and huge garbage can type containers at the end are the “blowers”  The blowers suck up earth from the mine shaft like a vacuum, and then, ultimately, deposit it in a pile. More than 250,00 mine shafts are scattered across Coober Pedy. 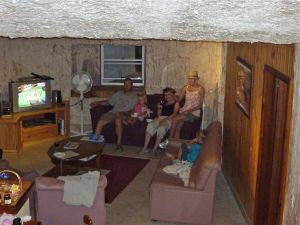 Due to the brutal temperatures, which can reach up to 122 degrees fahrenheit, many people live underground in dugouts. We scored because Ed and Judy generously decided to treat us all to a stay at an underground Bed and Breakfast called, appropriately, “Down to Earth.”

It was fabulous. The temperature was perfect, and it was so still, dark, and quiet at night.— and I still consider it one of the best places I’ve stayed. “Down to Earth” even had a hot tub (above ground). 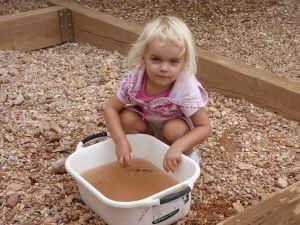 Just as the lodging is geared toward the ground, the sights of Coober Pedy revolve around the mining and opal operations. Taking tours of mining shafts and underground facilities are highlights. One mining museum even offered a “noodling” field, which was full of rocks and debris and the potential for little opals. Talk about looking for treasure. 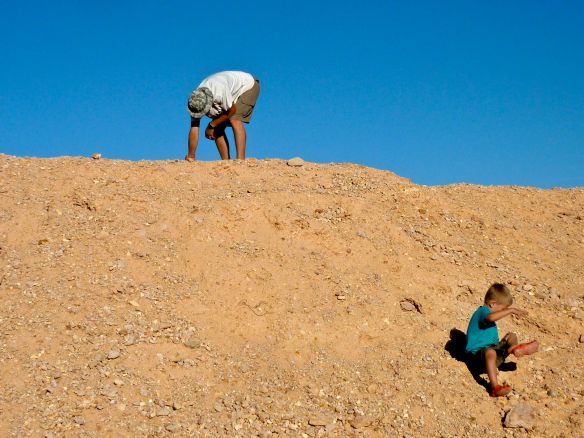 Kurt and Eddie looking to strike it rich.
© Stephanie Glaser

After a few days, you start getting into the Coober Pedy frame of mind. — At least this happened to Kurt. He got “Opal Fever” and decided to do some freestyle noodling. Later that night, we ate at the local corrugated, Italian Club, where miners’ hardhats decorated the walls. We mingled with characters who seemed like Crocodile Dundee’s long lost mates, no doubt. Outside Outback vehicles with “roo guards” dominated the parking lot. 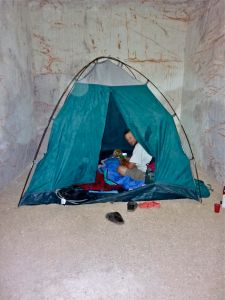 Finally, Kurt and I decided it was time for some underground camping with Eddie and Kasey. We found a hostel/camping place that offered underground sites. What could be more cool than not only camping in the Outback, but camping underground in the Outback?

We soon discovered, the ground was very hard. No matter how much padding we put down, it didn’t really cut it. One doesn’t need a chiropractor when you can sleep on rock solid ground in Coober Pedy.

Another aspect we hadn’t considered is the echo effect of, essentially, a cave. The underground walls amplified everything — whether it was a child’s crying or a large man’s snoring.  Both pervaded all through the night.

Kasey was very restless, and she cried out several times. When she finally settled down, we could hear the campers right next to us, snoring loudly. Kasey’s cries had blocked out the snoring. On a positive note, at least we knew the large man was sleeping soundly. One of the bonuses of sleeping underground is that the ever-present flies of Coober Pedy don’t like the dark recesses of a dugout.

It’s a good thing, because large snoring man would have surely choked or been a perfect depository for fly eggs.

Actually, in the end, the whole underground camping experience was totally appropriate — we were in the Thunderdome. Sweet dreams, Eddie, Kasey and Mad Max. 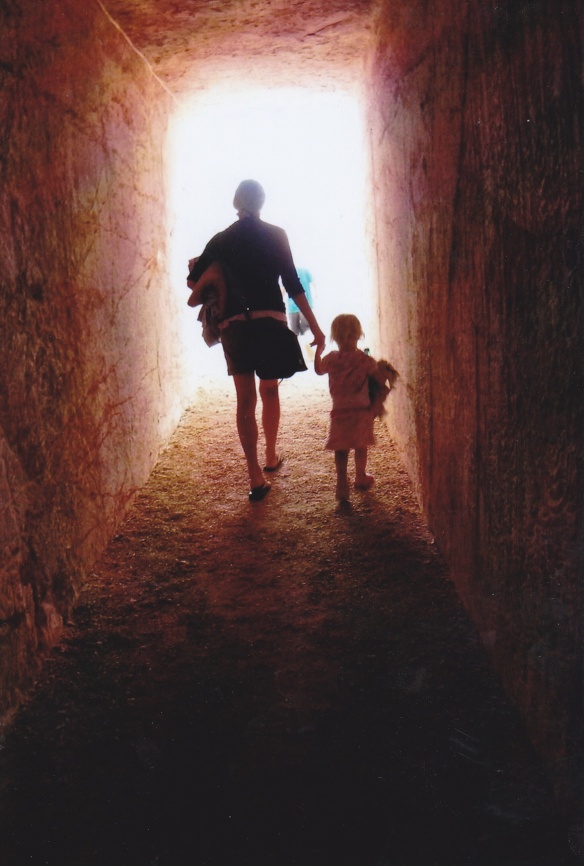 1 thought on “Camping in the Thunderdome: “Good Night, Mad Max””