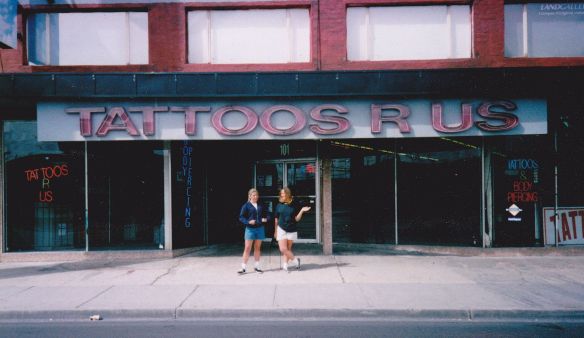 Two out of three Vegas cab drivers recommend Tattoos R Us to their riders who ask. At least those were the results of an informal poll about where to get tattoos taken by my friends Steph, Anne and me. This data, along with a prominent ad featured in the Las Vegas Yellow Pages, came in handy when, ultimately, I wanted a bit of rebellion — in a pretty mainstream sort of way.

Fed up with a brutal Minnesota winter and a bad breakup, I made a last-minute decision to join my friends Anne and Steph on a girls’ weekend trip to Las Vegas. A good dose of Vegas guarantees a distraction at the very least.

The schedule of pool time, nap time, get-ready time, dinner drinks and dancing time was perfect although no rebellion there.

Of course, one goal of my friends was to devote some time to the casinos. They went for Blackjack, Craps and Roulette.  I cranked ten dollars through a slot machine and declared I was done. That was the cost of a CD after all.

Because, at that point, I ranked everything in terms of loss, I couldn’t get into the mode of gambling. Every day at breakfast, our group would recap the winnings and losses of the previous evening. “I’m $2,000 down after last night,” said one of Anne’s friends. “But the night before I was $4,000 up.”

What the — Just cut your losses — GET OUT NOW was all I could think. After expressing concern over the up and down developments, I sensed outrage.

“Are you kidding?” Shelly said. “The weekend is just getting started and this is the way it works.”

“You just don’t have the mentality for gambling, Steph.” said my friend Steph (I’ll refer to her as Steph C).

“You have to take a risk,” she added.

What? Didn’t I take a risk by deciding to go on this trip two days ago?

Apparently not. And really, I considered it to be rather sensible not to have a gambling streak. Damn. I was nowhere near becoming a rebel.

That night, we went to the Hard Rock Café, and immediately Steph C and Anne went to a Blackjack table. I sat and watched. Soon a gentleman at the other side of the table asked me to bet for him.

“I think I have a Sugar Daddy!” I congratulated myself as Steph C. elbowed me.

Definitely, I could take a risk with someone else’s mula.

To my dismay, after one round, I had blown this guy’s money. Trying to be coquettish (which is word I try rarely to use), I batted my eyes a bit to see if my S.D. was going to put more cash down for me.

This could be considered risky since I didn’t want to be too forward in case he was thinking I’d lay down something other than cards a little later.

There was nothing to worry about. The guy was not interested. I didn’t think the coquettish thing would work. My lash batting looked more like I was trying to dislodge a contact lens suctioned to my eyeball. 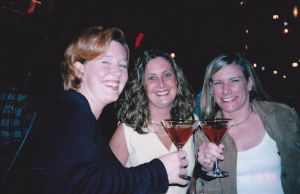 Gambling wasn’t doing it for me. It was time to do something more exciting. At one point, someone had mentioned getting tattoos. That was it! Tattoos were timeless symbols of strength and rebellion. Actually, it was 1998 when tatts and piercings were everywhere.

Really, tattoos were the symbol of conformity. Oh well. I didn’t care; it still involved risk and pain.

So we conducted our poll with cabbies on where to get a tattoo in Vegas. Our first driver responded like this:

“Tattoos. Well, I have one that I got in the navy. I don’t really even remember getting it. But in Vegas? Hmm…I guess Tattoos R Us is as good as any.”

Our next cab driver who took us back to the hotel at the end of the night agreed. Back in the room, we consulted the Yellow Pages.

“Look Tattoos R Us has their own ad!” I exclaimed. Surely, that indicated they spent money on marketing, so at least they must have a clue.

It would have been cooler to go to a place like “Satan’s Ink Stain” or “Demon’s Quill and Drill.” But, of course, when it came to having a needle grinding your skin, mixing blood and ink, you want a tattoo parlor to be pretty clinical and non-threatening. 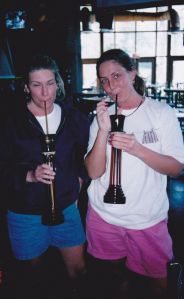 So, we added inking to the itinerary. However, the only appointments we could get were the day we were leaving.

That morning, the rebellion idea seemed overrated. To get back in the mode, we all drank liters of beer with huge straws.

Of course, you are not supposed to drink before getting a tattoo, and I didn’t have any statistics, but it seemed that was a pretty unrealistic expectation. Surely, thousands of people have been inked under the influence and survived.

Our cab driver who brought us to the shop gave us our third polling result. “Yeah, I brought someone here last week. It seems pretty decent.”

Once at the shop, we picked out the tattoos. I went with a sun — life, joy, the beach since I liked to lay out and get tan.

Then I saw the guy who would give me a tattoo. Holy heroin addict! I didn’t actually know if he was on the junk, but dang, he looked pretty strung out or hung over at the very least. I stared, getting nervous about the needle and blood combination. This guy better not nick himself. What if he has hepatitis or HIV? Where did he get his training? Was it with a bedspring in prison? 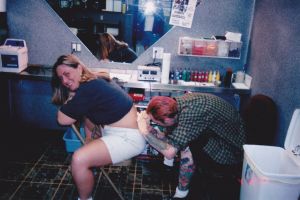 As I continued to judge, he was zinging Anne’s lower back.

“Hi, I’m Steph,” I extended my hand and sat down as if this was a job interview. If this guy was going to mark me with a permanent symbol on my body, the least I could do was introduce myself and find out what his name was. “And what is your name?” I asked way too cheerily.

“Brian,” he responded in a manner that said: “Okay, suburban chick, just sit down and let me bang out this cookie cutter sun.”

When I get nervous, I have a tendency to talk and ramble — a lot. Brian did not look like he was in any mood for rambling. I looked around, desperate to think of something to talk about. Since I had been in a sorority in college, I could start a discussion about a linen napkin if I had to.

I saw the subject. Brian had a sticker of “South Park” on his workbench. I was a big fan of the show, too.

“So if you don’t already, Brian, which ‘South Park’ character would you most like to have a tattoo of and why?”

He paused for at least a minute but still lowered the needle. Here came the pain.

“I think Ike.” He finally said. I got a complete sentence out of him. Without any more prompting, Brian continued. “He’s definitely the coolest one on the show.” I was the one who tuned out since I was distracted by the needle running through the top layer of my skin.

It was done. I had a sun just above my right shoulder blade. “Thank you, Brian.” I shook his hand again, because it’s actually a pretty intimate act. Steph C, Anne and I admired our new tatts and then left to pack.

At  least I could tell the people next to me that I had to sit upright with a pillow because I couldn’t put pressure on my new TATTOO!

13 thoughts on “Travel Oops: What Happens in Vegas Sometimes Comes Back With You”