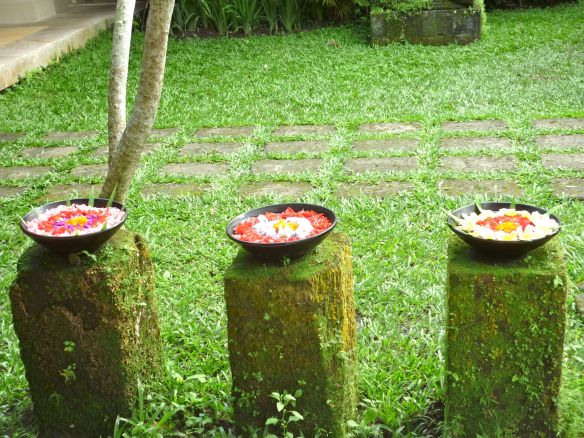 While your chi may be in balance, your senses go ballistic in Bali. After all, you’ve got the sweet smell of incense and plumerias wafting while wooden chimes clonk together in the humid, tropical breeze. 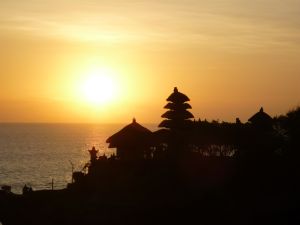 And then, overworking your retina, Technicolor greens of jungle vegetation, rice paddies and terraces pop. Meanwhile, soothing golds of National Geographic sunsets and ornate costumes calm down the pupil palpitations.

You may experience the wet brush bristles that a Hindu priest gently dabs on your skin before he places rice grains on your forehead to deliver a blessing. At the end of the day, with a semi-warm Bintang, swallow down all of those sensory details along with the lingering taste of turmeric and chili peppers from Nasi Goreng, Indonesia’s national dish.

It’s enough to keep you completely zenned out for life. However, a specific sound on the Island of the Gods easily shatters that inner peace and jars your senses into consciousness. A rooster. At 4 a.m. Every morning. On the dot. (Aren’t they supposed to wait until sunrise?)

For centuries, roosters have strutted their stuff as part of the scene in Southeast Asia, where they were originally domesticated. In fact, today, these cocks are like scooters in Southeast Asia — persistent, aggressive often competing and always demanding attention. In Bali, cockfights are sacred and have always been part of “Tabuh Rah,” an important Balinese Hindu ritual.

Indonesia, however, banned general cockfights in 1981, so think of all those roosters left to roam free. Cock-a-doodle-dooing at all hours. And after listening to one crow nonstop for at least one hour, I can assure you it’s — “cock-a-doodle-doo.”

“Remember,” my husband Kurt said bleary eyed. “You’re enchanted by everything about this place.”

“I did say that didn’t I?” (And, typically, I don’t use the term “enchanted” unless talking about a “kingdom”) Reaching for an extra hotel pillow, I placed it over my head. However, no barrier could drown out the shrill sound. Damn. Is it sitting on top of our suitcases?

But, yes, I was enchanted by Bali and Asia, really.  As a child, I was fascinated with Asia. At three-years-old, I dressed up as a Chinese girl for Halloween when my parents brought back a silk jacket, pants and slippers for me from San Francisco’s Chinatown.  In 1980, my sister and I were transfixed by the miniseries “Shōgun,” based on James Clavell’s novel about samurais in Japan.

We used to imitate the beautiful interpreter Lady Mariko (played by Yoko Shimada). “Anjin-san, to understand Japanese….is to think Japanese.” Then we would quote American actor Richard Chamberlain’s ubiquitous phrase. “Wakarimasu!” (I understand) 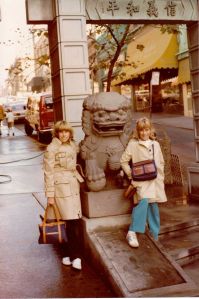 For my 13th birthday when we lived in Southern California, I requested we go to Chinatown and Japantown in San Francisco. Another birthday was watching the chefs at Benihana wield and twirl knives as they chopped, sliced and diced meat and vegetables.

But somewhere along the way, as I became a traveler on my own, I got sidetracked and visited Europe a few times instead.

My fascination with Asia resurged, big time, about six years ago when I began teaching a unit on the Vietnam War to my high school seniors. With all the research, readings and discussions about the devastating war for both sides, I developed a deep interest in the region. Now I needed to travel to Southeast Asia.

Consequently, we were living in Australia for one year in 2010, and Indonesia is a mere five-hour direct flight from Adelaide and a cheaper holiday than going to the Great Barrier Reef. It was a no brainer decision to go to Bali. Finally, I was getting my chance to visit Asia — specifically Southeast Asia. 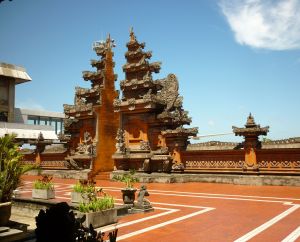 So, in reality, I probably would have agreed to stay in the pen with the rooster upon our arrival. Bali captivated me even at the airport, where, through a window, we spotted an intricately carved temple structure.

When we arrived at our hotel in the cultural hub of Ubud, the staff greeted us with fruity green drinks. I especially appreciated this refreshment since I was feeling rather ripe after having spilled coffee in my lab on the plane, and then having my daughter Kasey barf in the same spot during the van ride to Ubud.

We walked down a few stone stairs to a courtyard, complete with a fish pond, which we discovered was part of our accommodations. What? A courtyard and a fish pond? Ours? 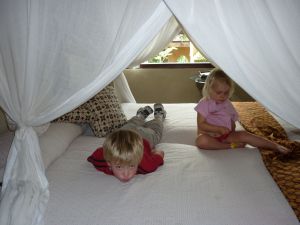 “Kurt we have canopies on the beds!”  I had never slept anywhere that had a canopy. “Those are mosquito nets.” Kurt informed me. With the teak wooden bed frame and the delicate netting draped over each side of the bed, it made malaria seem romantic in a twisted way.

We washed up in the bathroom next to a tiny trickling waterfall. This certainly was not the way we were used to traveling, especially after tenting it in several Australian locations, including the Outback.

It’s also one of those uncomfortable moments when you realize the place in which you are  staying has light fixtures that cost more than the average person’s yearly wages. Indonesia and much of Southeast Asia still have “emerging economies.” Although, awkwardly, once the wealth of colors, tastes, smells, sights and sounds hit you, economics blur into the background. 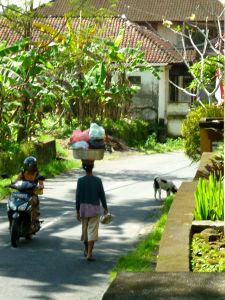 So many visual details catch your eyes, such as eroding moss-covered statues of Hindu deities and Buddha, as well as flower adorned, woven coconut leaf offerings for the gods perched on practically every surface.

We passed by a woman with ramrod straight posture, carrying a load on her head that would cause most spinal cords to crumble. Further up the road, plumerias lined a random staircase. Meanwhile the sounds of scooters zooming by or beeping never ceased.

Bamboo and palm leaves from huge trees crisscrossed over the main road, creating a massive vegetative jellyfish-like umbrella with tentacles of vines dangling down. I’ve never seen as many shades of the green color spectrum unless rows of St. Patrick’s Day cards and merchandise at Wal-mart count. 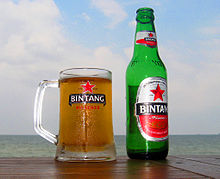 We wandered into a grocery store. It was magical. Roaming from aisle to aisle, I checked out all the different products. We grabbed some basics and cold Bintangs. While in the checkout line, grocery store cashiers bowed their heads with their hands pressed together in prayer after they gave us change.

Ambling back to our hotel, we grabbed dinner at an outdoor cafe. Our waitress wore a simple black t-shirt, sarong, plastic flip flops and a plumeria in her hair. I wanted to adopt her simple fashion style immediately.

“I love everything about this place,” I announced to my family. By the satisfied looks on Kasey, Eddie and Kurt’s faces, they agreed.  We were blitzed on Bali. 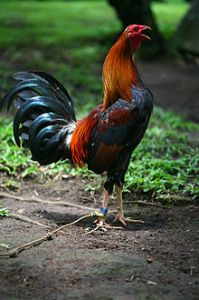 The next day: What the hell? Where is that thing? On day three, the rooster sounded like it was next to the bed, telling us to get up and get our fix of sensory stimulation. Then while walking into town, we heard a few more roosters. Additional encouragement. Even when we eventually re-located to another part of the island, roosters pervaded.

In Sanur, a beach community, we stayed in an air-conditioned highrise hotel with rooms that had more square footage than our house in the US.

Every night, I slept fitfully with no cock-a-doodle-doo to wake me up. Although sleeping well, I actually missed that sonorous reminder that we were in Southeast Asia. It was time to be weaned, which is a necessity, because Bali gets into your system. It enchants even with ultra punctual roosters.

4 thoughts on “Travel Oops: Interrupting the Rapture — Roosters in Bali”