Relentless fluorescent lighting, a hard floor and steady draft from the window pane did not make for a good night’s sleep at Denver International Airport. Basically, I was getting too old to sleep in transportation hubs voluntarily.

But since my flight to Los Angeles was at 5:30 a.m. and I had to teach my Public Speaking class the night before, driving straight to DIA, which is three hours from my hometown, seemed like a logical plan.

At any rate, I had no trouble making my flight to LAX and meeting my sister, Suzanne, who arrived around the same time, 7:30 in the morning. We were about to embark on a Japanese Journey that we’d been planning for nine months.

Actually, we’d really been thinking about it since the miniseries, Shogun, based on James Clavell’s novel, aired in the 1980s. Watching Shogun, Suz and I became obsessed with Japan and, in particular, Lady Mariko, the beautiful Japanese translator (played by Yoko Shimada) for English captain and trader John Blackthorne or “Anjin San,” (played by Richard Chamberlain.)

Word-for-word quotes from Lady Mariko flew from our mouths all around our house. “It is not sad, Anjin San; it is just one of life’s most important rules”; “In Japan, Anjin San, there are only Japanese ways”; “Anjin San, to understand Japanese, you have to think Japanese.” We pretty much wanted to be Japanese.

Consequently, this trip was a long time in the making, and Suz and I were just a tad bit excited. We killed time at LAX by plugging in and visiting Starbucks. Apparently, we killed a bit too much time. As we made our way to Singapore Airlines ticketing, an army of about 80 Japanese teenage school girls in matching uniforms flowed into line right before us.

The army of Japanese school girls scoots into line before we do.

A bearded man in an ill-fitting sportscoat, who appeared behind us said, “Don’t worry. The Japanese are excellent sleepers. I know. I live in Japan.” That statement, albeit completely random, was troubling on a few levels. How did he know that the Japanese, especially young school girls, slept well?

Not even knowing how to react, Suz and I turned away from the man and focused instead on the line. Soon, Vicki, a Singapore Airlines representative with bright fucshia lipstick, spied us and approached. Yes! Surely we were going to be moved to the front of the line.

“Hello, you are both traveling together?” Vicki asked of Suz and me as we nodded in unison.

“We are overbooked on this flight to Tokyo and we’re wondering if you would be willing to give up your seats.” She looked back and forth between us, directly reading Suz then me to see who was the weakest link, or perhaps, who was the toughest obstacle.

Sensing our reluctance, Vicki smiled widely and went in for the jugular.  “We will pay you $1,300 to give up your seats.”

“Is that in the form of a flight voucher?” Suz quickly fired back.

“We will put you up for the night in a hotel near the airport.”

“We will give you food vouchers.” 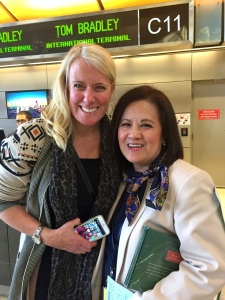 “You will have a guaranteed booking on the same flight tomorrow. Think about it ladies,” Vicki smiled not taking her eyes off us. “It’s a lot of money,” she added. “Also, it may not even happen. We may have enough seats for everyone, so you may not have to give up your seats at all.”

She was good. Suz and I both looked at each other with wide eyes. Vicki backed up slightly giving us room to talk.

“I don’t know. We’ve been planning this trip for so long,” I began. “I mean we only have eight days to begin with.”

Being an indecisive person, by nature, I could see pros to both sides, but only one con: not getting to Japan until the next day. What would JC (James Clavell) do? Geez, was the universe trying to tell us something? Was the plane leaving today going to crash? Would delaying our flight save us from impending doom? I did not want to end up as a lyric in an Alanis Morissette song about irony — real irony. “Well, isn’t this nice…”

“I know. That’s true,” Suz said. “And it’s whatever you want to do, Steph.” My sister was as good as Vicki. She just kept quiet and let me process.

“You can do a lot of shopping,” Vicki finally offered while waiting for us to decide.

“You know,” Suz started. “We could give her our names and just see what happens.”

“Yes…” I said absently as my mind whirred with — not really calculations — but a list of things that the money could pay for both in Japan and at home. I could probably get a yukata, the lighter weight, cheaper version of the kimono.

“Okay we are in,” Suz told Vicki who then motioned us over to the ticketing counter. We still had to check in and check our luggage. If Singapore Airlines needed our seats, the reps would notify us during the boarding process by calling us to the check-in counter at the gate. 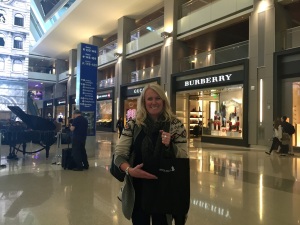 We had to wait, but now we could go into the glitz and glamour of the interior of LAX’s international terminal. Although sleep deprivation kicked into overdrive, the thought of getting $1,300 in cash made me slightly giddy.

Suz and I stopped at the Border Grille to get some food, but more importantly, drinks. There we met Gaylene, who would be not only our good natured bar tender but also our Yoda of sorts. She could definitely turn a phrase and dispense some wisdom. Here were some of her gems:

Our bartender and Yoda, Gaylene with Suz.

Immediately upon ordering drinks, we told Gaylene about our seat sacrificing proposition.

“Get out!” she said, reminding me a little bit of Florence, the sassy maid on the 70’s hit sitcom, “The Jeffersons.”

We all agreed that $1,300 was way more than all three of us combined would ever make in a couple days of working.

“Well, maybe that’s what I outta do,” Gaylene joked. “Get me a ticket on Singapore Airlines and give up my seat.”

After a few cocktails and conversation, we had to say goodbye to Gaylene, and go either board the plane to Tokyo or a shuttle bus to a hotel on the LAX strip.

The army mobilizes. This time, however, we are in front of the line.

The army of school girls had mobilized — you could not escape them. However, some of the girls lingered, taking various selfies in front of Starbucks and a money exchange booth. Most likely, they would decide our fate since they would probably take up a substantial block of the plane, and it’s not like one or two students would stay behind to give up their seats. A stream of people moved forward to board, and we hadn’t yet been called.

Having mentally spent the $1,300, I became anxious about not being summoned. Suz and I darted quick looks at each other. Our zone was boarding.

Will there be any seats left for us? Or will we get the money?

“Ms. Stephanie Glaser and Ms. Suzanne Miller, could you please report to the check-in counter at the gate.”

As we approached the counter, a redheaded man with a family of four stopped us.

“Did guys put your names in to give up your seats?” he asked.

“So did we.” he maintained, looking bitter, already, at having not been called forward. All we could do was shrug our shoulders. The universe had spoken, and so had the Singapore Airlines reps. They told us to go back to ticketing. 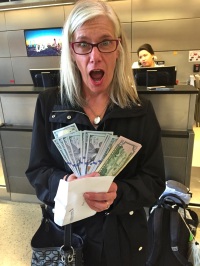 Revealing the result of giving up our seats

As we approached our favorite ticketing counter, we saw a Singapore Airlines rep walking to Vicki with a wad of cash.

“Here you are, ladies,” Vicki handed us two envelopes. We opened them and to be honest, the money looked foreign since it was all Benjamins!

And that was not all. While we waited for our luggage to arrive, Vicki escorted us to meet Cheryl, the Singapore Airlines manager on duty, who came over with two SA bags containing chocolates. But Cheryl did not merely hand them to us.

After the chocolate ceremony.

She held the bags by the handles, smiled broadly and said, “We greatly appreciate that you gave up your seats today. On behalf of Singapore Airlines, we wish to give you each a gift of chocolates. Bowing slightly, Cheryl presented each bag to us individually.

I believe we had just taken part in a chocolate ceremony.

Chocolates and cash in hand, we were feeling pretty large. The SA reps who were re-booking our flight apologized for the delay in getting our luggage off the plane. I felt like saying, People. Don’t be sorry. You just gave me a wad of CASH. And by the way, you can just have that luggage and I’ll buy all new stuff with my $1,300!

It just doesn’t end: Selfie with a Celeb

Soulja Boy and part of his entourage.

As if we couldn’t feel any larger than large, Angie, one of the younger ticketing agents, suddenly abandoned her computer, leaned over the counter and waved to an individual walking by. “Love you Soulja Boy! Peace!”  We turned around to see a guy with headphones on and wearing an oversized basketball jersey, chunky gold chain and droopy pants. He stopped at Air France ticketing, not far from us and spoke to a very big, imposing figure who constantly scanned the premises. A body guard.

“Soldier Boy?” Who is he? I asked Angie.

“Soulja Boy and he’s a rapper,” Angie said with a huge smile. Suz and I tried to convince her to go get a photo with him. “We’ll cover the counter.”

What would a baller do? Get a photo with Soldier/Souja Boy, which we did and I’m fairly certain we just opened a new “mature female” demographic fanbase for him.

We are down with this. Peace out, Soulja Boy!

After spending a night at the Four Points Sheraton and eating voucher vittles, we checked in at Singapore Airlines again, said “hi” to Vicki and Cheryl and made our way back to the glitz and to Duty Free, where we were mostly just satisfied with window shopping, knowing that if we wanted to throw down, we could. 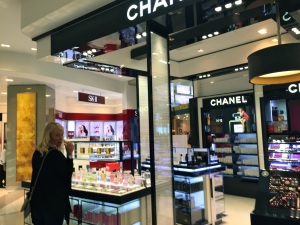 Finally, Suz and I sat down to tell Gaylene about the many adventures that we had experienced all within the confines of LAX. She was quite impressed with our Souja Boy selfie.

“We also had to pay a visit to Duty Free,” Suz mentioned with a regal air.

“Well, of course, now that you guys truly are ballers.”

“Actually, we only bought some makeup,” I said. “Hopefully, we know better than to blow all this money at the airport.

“When you know better, you do better,” Gaylene maintained and I realized then it wouldn’t have sounded odd at all to hear her say, “To understand Japanese, you have to think Japanese.” 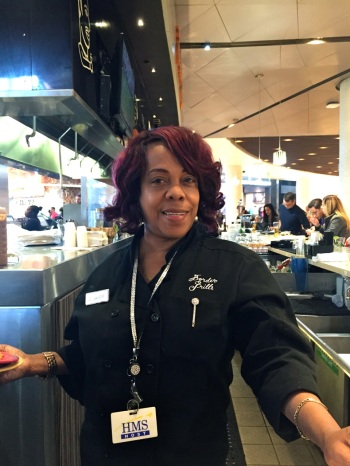 Stay tuned for more Oopses and stories from Japan.

Finally on our way. And saying goodbye to LAX.