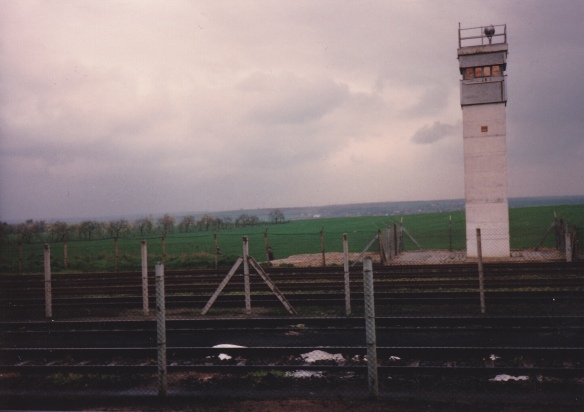 Let’s face it — it’s easy for an American to flub up when visiting a communist country. So many rights we take for granted are just plain illegal — like taking photos of border patrol lookout towers. Actually, this is probably frowned upon in the US, too.

Definitely, however, in East Germany in the late 1980s, taking photos of a guard tower was a bad idea. This may seem like a definite “duh!” to seasoned travelers, but for a college student who, at times, exercised bad judgement anyway, it was a cool image for a photo album.

I was the college student and the incident happened while on a train trip. I was with fellow students who were studying abroad in the Netherlands. We were on a field trip, basically, with our Dutch history professor.

When we arrived and stopped at the border between West and East Germany, right out the window was the East German flag. I snapped away for an establishing shot in my album. A few minutes later, we saw the guard tower. Of course, this was the eighties, so this scene was right out of any movie at the time when international intrigue always involved communists. I had to have a photo.

Perhaps nothing would have happened if I had turned off the flash. However, the flash went off. Mere minutes later, guards came through the train corridor. They went straight to our professor. We heard a commotion and peeked out to see the guards clearly pantomiming the click of a camera. The professor turned our way. It seemed pretty clear this was not good.

He came straight to the cabin and hissed that whoever took the photo needs to hide the camera immediately. Holy crap, were we going to be searched? Excellent! Everyone waited and when the “cool” factor wore off, I was scared. Would they take my camera? Worse, would they take me? Did East Germans send people to Siberia? Could you bribe communist border guards?

Minutes passed and nothing happened. The train started up again. Brett, one of my classmates, went to the cabin door to sneak a glance at the corridor. He looked around then shrugged his shoulders. Meanwhile I sat on my duffle bag, where I had stuffed my camera. After about an hour, when no one came by the cabin (not even our professor to reprimand me), I quit clenching my teeth.

Ultimately, nothing resulted from this aside from me getting to keep my camera and a lasting forbidden photo. This event happened in March, 1989, just seven months before the wall “fell.” I’m guessing the guards had other things on their minds than throwing me in the Gulag.