For a Westerner, India seems ready made for a Travel Oops. Certainly, at the very least, visitors, inevitably, encounter the unexpected.

Jane Whitmer, a program manager who teachers a Nurturing Parenting class for the Family and Youth Initiative in Salida, CO, says her travel mantra is “Be open to the Possibilities.”

With that attitude, she traveled to India in the summer of 2012, and at one point, she even told one of her traveling companions, “You’re in for a ride now, Helen. This is India.”

A seasoned traveler, Whitmer had wanted to visit India for the past 10 years. After arriving there in June, her adventures included having a cobra rest on her head; meditating and doing yoga at an ashram; staying at a rickshaw driver and his family’s house; walking on a back road that included obstacles like irrigation channels, barbed wire fences and bulldozers; and riding on a bus that traveled via a one-lane road over an 18,000 ft. mountain pass — just to name a few.

Whitmer also experienced amazing moments with the locals. One of the highlights of her trip was being dunked in the Ganges River. As Whitmer was sitting on some steps by the Ganges, a woman summoned her over. “She could tell I was adventuresome,” Whitmer says.

The woman then gently dunked her in the river a few times. Although the water’s temperature was quite cold, Whitmer maintains the river was not as dirty as she expected it to be. This experience, she says, was incredible.

On another impromptu occasion, she was asked to lead a workshop on alternatives to using corporal punishment for teachers at an orphanage for children with AIDS.

One amusing moment happened when she asked a rickshaw driver if she could get a Diet Coke.  He then asked if she wanted “low”, “medium” or “high” grade coke. After realizing the man was referring to cocaine, Whitmer and her friend were highly entertained and got out a camera to take the guy’s photo. “I thought I would die laughing,” she says. Understandably, the man bolted off.

Ultimately, for Whitmer, India was full of the unexpected, and consequently, it was magnificent because of that.

How would you describe yourself as a traveler?

I want to see the other culture from the inside. I am a very adventuresome, Lonely Planet, no tours [kind of traveler].

What was one of your most memorable Travel Oopses?

The most dangerous one was with the rickshaw. We’re driving out to a meditation center that is probably a good 10 kilometers  outside of the town, Bodh Gaya, where I was staying. 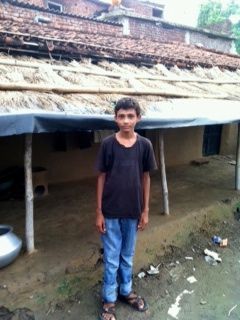 So  we’re driving out, and I have a 12-year-old I befriended who sort acted as my guide. It was Jitesh, myself and my rickshaw driver, and it was approaching 100 degrees; it was in the high 90s, and I said [to the driver], “If you get tired, I’ll drive,” just jokingly.

I usually do a lot of exercising, and I hadn’t exercised for the whole month that I’d been there, you know, like officially exercising. And, I have a lot of friends who are serious bikers so I was like, “Sure, I can drive.”

We got out to where it wasn’t dangerous, [the driver] didn’t think, for me to drive. There weren’t pigs and cows and a million motorcycles on the street, and so he pulled over and said, “Your turn.”

So I start driving, and I was feeling pretty hot — you know like, “Okay, good, I’m getting some exercise,” and I had the two guys in the rickshaw and there were a number of pretty serious potholes in the road, and the rickshaw veered to the right a little bit and my Oops, my stupid, “Better-Get-Prepared-Jane,” [moment] was that the brakes were reversed,  so when I squeezed the right brake, thinking that it would stop me, it pulled me to the right and into a lake.

There was a lake on the side of the road. So the rickshaw is going down toward the lake, and I’m falling off, and my foot is caught in the frame of the bike because it was a man’s bike. So I had a twisted ankle as the bike is dragging me into a lake, and luckily they [Jitesh and the driver] did jump off and stop it from going all the way in.

When you knew the rickshaw was going out of control, what were you thinking?

I was really, really wanting to figure out how to get my foot out of the frame of the bike. And it just wasn’t coming. I kept twisting it and it wasn’t coming

I thought I’d broken my ankle, and that was a really bad idea. Next time, I will get a little bit of a lay of the land on the bike. Because they’re much harder to drive than you think even if you understand and have been given directions about how the brake works. So that was a very very stupid thing.

Luckily, the bike wasn’t hurt, and my leg wasn’t broken. I have great, great appreciation for my body, because I’m sure that legs that haven’t done as much yoga as mine would be broken.  So that was a pretty good one: The Rickshaw Wreck. 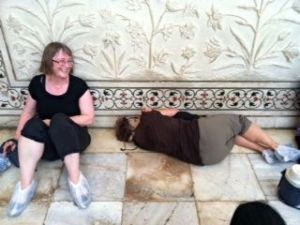 Jane lying down, in obvious discomfort, on the tiles of the Taj Mahal.

Tell us about your Taj Mahal Oops.

I did not really want to go to the Taj Mahal. It was not on my…it was on the bottom of my list. Other people say, “How can you go to India without going to the Taj Mahal?” Easy. It would be easy for me.

I suppose going to the Taj Mahal when you know you have bedbugs and you have the Delhi Belly and it’s 120 degrees…I think that would probably qualify as stupid.

What advice would you give to someone when they are in the middle of an Oops or facing the unexpected?

It’s tricky because, in hindsight, I would have gotten more information about the rickshaw. Sometimes, I would do things differently.

You just make the most of [the experience] and be as present as you can and see what shows up.  You have to be so in the moment. Just be fully present.  You never know when the pig is going to walk out in front of the rickshaw.

How was your trip overall?

[I felt at home] I had found my people, found my place. Despite the chaos, and the intensity, I felt so renewed and rejuvenated. I felt like I was in love with their country every second I was there.

It far far exceeded all my wildest expectations. It was magnificent.  It was Intense, in your face, amazingly real. Everybody’s very authentic. It’s life at it’s biggest and best.

A lot of it was a spiritual journey for me…seeing how their spirituality is infused in their culture was such a gift.

5 thoughts on “The Travel Oops Interview (The Rickshaw Wreck)”