“Miss, Miss, MISS GLASER!!” I heard from a distance while I patrolled the grounds of Le Fevre High School where I was spending one year as an exchange teacher. Ian, a sweet yet somewhat socially challenged year nine, careened toward me across the asphalt.

His backpack was sliding down his shoulders and his uniform jacket was flapping as he bounded over. Actually, Ian looked a bit deranged. Generally, one never knows what to expect while on yard duty at “Le Feral” (the kids’ affectionate nickname for their school).

“Miss! We have a new prime minister – it’s Julia Gillard, and she’s a ranga!”

Ian stopped briefly in front of me and pointed to his own closely cropped brown hair as a comparison before running on to give everyone else at recess the newsflash.

It was an incredibly momentous occasion in Australia. Overnight, literally, Julia Gillard had been named the first woman prime minister, and because she is a redhead, it was a double victory – one for women and one for rangas everywhere.

“Ranga,” short for orangutan, is the label some Australians, mainly teenagers, give to anyone who has strawberry blonde to fire engine red hair. It’s pretty clear, even to a foreigner, that “ranga” is not necessarily a term of endearment.

In fact, “ginger” the term inspired by “South Park” and the one my own American students used for redheads sounded rather amateurish in comparison.

At any rate, the entire day, I tried, despite my total ignorance of how the Australian political system worked, to bring up the topic of the new PM in class.

Really, it seemed like a bloodless coup to me. On June 23, 2010, Kevin Rudd was prime minister in the p.m. and then, by the time we all woke up the next morning on June 24, Julia Gillard, a member of Rudd’s own party, had taken his place. Furthermore, there had been no election.

It was definitely a historic day and a teachable moment.  It was worth attempting a class discussion with my three classes of year 8s. Perhaps they would teach me something.

“So, guys, what do you think of your new prime minister, Julia Gillard?” I asked after the bell had rung. The reaction was always the same.

“She’s the first ranga we’ve ever had for PM,” piped up Kane, a somewhat nerdy, but amiable kid who frequently picked his braces.

“Yes, but she’s also a woman,” I added. “How does that make you feel? After all, she is the first female to lead the country.” I looked first at the girls to see any hint of pride, sisterhood or even a “You Go, Girl!”

No Expression. The boys just looked doubtful and bored.  Mitchell, the class clown, shredded a piece of paper and then dropped the bits so they fluttered down onto the table like dandruff.

Curtis takes being a “ranga” in stride
© Stephanie Glaser

“Actually, she’s not bad looking for a ranga,” said Curtis, a redhead himself.

“Yeah, hey, Curtis, one of your kind is our PM,” Mitchell added while gathering his paper pile; he could never miss an opportunity to comment on his classmates.

Curtis seemed to take being a ranga in stride and retorted, “Yeah, and she’ll always be better looking than Tony Abbott (of the opposition). His ears stick out heaps far.” 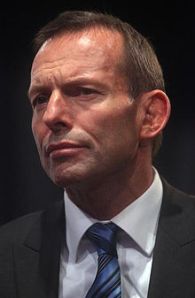 “What is a dag?” I demanded, walking over to him in as an imposing manner as I could. “It better not be slang for a gay man.”

“No, that’s a “poofter,” Miss. A “dag” is someone who’s totally uncool.”  I could always count on Mitchell to bring up and helpfully translate any derogatory phrase or term.

“But Julia has a big nose, and she is still a ranga,” said Catelyn who was usually judging someone. However, I was somewhat grateful for her participation since she had stopped applying eyeliner long enough to bring the subject back to Gillard.

“I bet she dyes her hair,” said Catelyn’s best friend, Amber. “It looks completely sus to me; it’s feral, really.” she added with authority. Amber usually had a streak of pink, violet or fuchsia running through her own hair.

Because we really couldn’t get past the ranga-ness of Julia Gillard, and due to my confusion about the Australian political system, the discussion tanked. 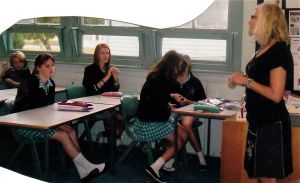 The good news was that, although Australia had a dreaded redhead in office, at least most of my year 8s knew not only who Gillard was but also the other politicians involved in this political event. I wondered whether the eighth graders at my American school could have held a conversation about political candidates.

Indeed, the fact that these 13-year-olds even knew what was going on seemed amazing. A few weeks earlier, the Labour party (confusingly, more liberal than the actual Australian Liberal party) decided that the current prime minister, Rudd, probably was not going to win the national election, which was only a few months away. So, basically, party members ousted him. “You are the weakest link, goodbye”;  “You’re fired”; “The tribe has spoken.”

At lunch, I asked my colleagues in the staff room what was up.

“Kevin Rudd had no chance to win, basically,” said my friend James, a 23-year-old teacher whose education background was history. Additionally, he regularly entertained teachers in the staff lounge, showing us viral You-Tube clips and sharing tales of his weekend exploits.

“Labour wasn’t happy with Rudd anyway, so Gillard challenged him to a leadership vote within the party. Rudd said ‘bring it,’ but he backed out before the vote even happened. Therefore, Gillard was unopposed on the ballot that went before the caucus.” James, who looked more like an indie musician with his spiked hair, goatee and his black pea coat, made it sound so simple.

Anne, my mentor teacher, had been misty most of the day because a woman was finally prime minister. It was indeed a massive victory to Anne.

“I never thought I would see this,” she said dabbing her eyes with a crumpled tissue as she looked over at me. It was a moving moment.

“It’s stunning, Luv, simply stunning,” she maintained. After a few minutes, however, Anne looked worried.  “Of course, we still need to make it through the election.”

Defer to James again. “She’s the prime minister at the moment because she’s the leadership choice of Labour,” he said while playing a clip on his phone that featured a guy who was sobbing over a double rainbow. “The 2010 election is already slated to happen later this year, but now it will probably be moved up in date to capitalize on Gillard’s transition to power.”

“You can move the date of the election?” I asked still baffled by what seemed to lack legitimacy.

“Yes, and our politicians only campaign for a few months unlike your Yank campaigns that are painfully drawn out.”

James shrugged his shoulders. Indeed, his assessment was correct in my view.

There was more to moving the Australian 2010 election date, but admittedly, I got lost and glazed over. Even James couldn’t make this topic clear or interesting anymore.

I focused again after I heard him mention the United States, comparing and contrasting our system to Australia’s.  A few other teachers at the table joined the conversation, accurately talking about the US system. Yikes. Surely, someone would ask me about the Electoral College. However, they didn’t need to consult me because James launched into an explanation that, really, I probably should have been delivering.

A pile of chads from voting ballots © Marcin Wichary

“Actually, it is obsolete since the Electoral College was set up in another era when your founding government didn’t trust the average citizen to make a sound decision,” James leaned back in his chair.

I felt like I was about to fulfill the dumb American stereotype – like the people who vote every season for contestants on “American Idol” but never show up to the polls for the presidential election. My chance to reconnect with the inner workings of the Electoral College had arrived during the botched election of 2000, but at the time, I had been more interested in the doomed hanging chad debate.

A few weeks after the political discussion in the teachers’ lounge, I learned that Julia Gillard and Tony Abbott’s official televised debate needed to be rescheduled.

Apparently, the debate was up against the massively popular Aussie reality show “MasterChef – Season 2.”  Both parties were worried about potential viewers skipping the debate to tune into finalists Adam Liaw and Callum Hann’s cook off.  Ultimately, the debate was moved to appear one hour earlier than “MasterChef” on the same night.

The political strategists made a good decision since 5.74 million people tuned in to the “MasterChef” season finale as opposed to 3 million who turned into the debate.  This fact was comforting.  It seemed to show that Oz and the US probably have more in common about our politics after all or, at least, the general voting populations. That was a new one for my lesson book.

11 thoughts on “In Australia: Beware of “Rangas” and Bloodless Coups”