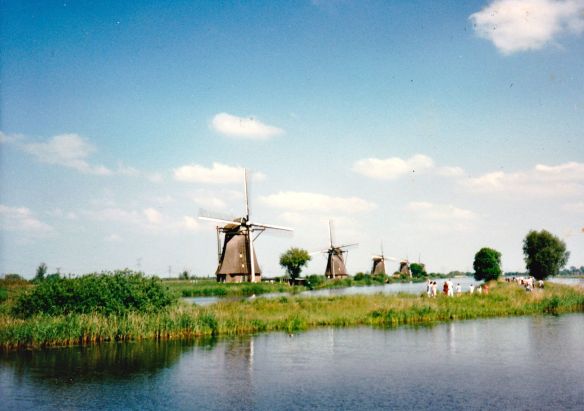 No more creating copy about high-speed railways, long-span suspension bridges, retrofitted freeways or any other engineering miracles. I was going to be a travel writer. For nearly three years, I had worked as an editor in the public affairs office for the College of Engineering at UC Berkeley, and I longed to write about other subjects. I would, however, gladly examine engineering feats along the lines of windmills, dikes and bicycles. 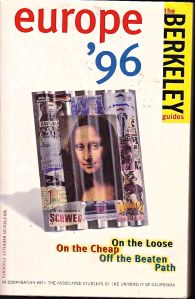 Hired to write insights about Europe — the Netherlands in particular — for the 1996 edition of the Berkeley Guides, a budget Fodor’s travel guide series produced by students at Berkeley, I had found a dream job. Although not a Berkeley student, I was a copywriter and editor.

Plus, I had studied in Leiden, Holland, for a year while in college. Ultimately, I could serve as a cultural anthropologist.

Sure, the job would be writing mainly for schleppers who had just graduated from college, a majority who would come to Holland solely for sin seeking in Amsterdam. That was fine.

I also would educate them on the country and dispel the stereotypes of Holland offering only tulips, windmills, and wooden shoes.

My Netherlands chapter would include perhaps a remote museum with a lost Van Gogh sunflower painting and lodging at an inn where the owners bring you pannekoeken in bed.

The city of Delft would receive mention for not only its famous china factory, but also its prestigious university and college town feel. 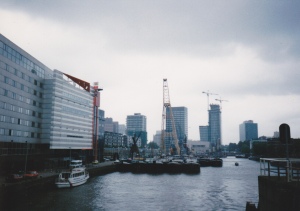 Rotterdam, sometimes considered the armpit of Holland, would be noted for its internationally important port, post-modern architecture and the annual jazz and blues blowout.

And, finally, for those who wanted to see wooden shoes, I would find a cobbler who hand crafted precious clogs before your very eyes.

Good to go, I already knew about some hip locations, but I would interview locals and probe for even hipper spots.

“Sprek u Engels?” I asked a preppie-looking student who was reading a Dutch newspaper on the tram. Of course, he would; all the Dutch speak flawless English, but, naturally, they appreciate it when one attempts to speak their language.

“Yes, a little,” he answered in perfect English. “How may I help you?”

“I’m a writer for The Berkeley Guides, a travel book series. Where do Amsterdammers go when they want great Dutch food? You know, like the kind your mother makes.”

“Dutch food sucks,” he said as he crinkled up his face as if I had waved Erwtensoep, the country’s traditional pea paste soup, under his nose.

“My mother usually makes pasta. Why don’t you try Bojos? It’s an Indonesian restaurant that all the Americans love.”

“But I don’t want to go someplace Americans go,” I maintained while trying to figure out what made my nationality so obvious. Couldn’t I be Canadian?

“I’d like to include a restaurant where they’re good Dutch meals, so travelers can experience traditional food.” The Dutch preppie looked at me quizzically.

“Why, it’s very boring food. Lots of potatoes,” he said.

I gave up, and the Dutch preppie was right.  Indonesian eateries were as common as Mexican taquerias in Southern California. This is because Indonesia was a former colony of the Netherlands. Maybe I should write about this historical link to food.

Certainly, I couldn’t write the truth that I was uncovering — the Dutch loved McDonald’s — especially the soft-serve ice cream. I discovered this because, as a fan of McDonalds’s soft-serve, I stopped in a few of Holland’s Mickey D’s, myself, where I would find more Dutch customers than tourists.

In fact, in Amsterdam, it was easier to find signs indicating a nearby McDonald’s than to find signs pointing to the former houses of Ann Frank or Rembrandt. Granted, some of the signage was for tourists, but again, every time you walked in a McDonald’s, you would see largely a Dutch clientele.

Are all these Dutch people headed to McDonald’s? © Stephanie Glaser

Was I supposed to write this in the book? “If you want to mingle with the locals, look for the Golden Arches — they’re easy to find, too.”

Furthermore, when did the Dutch embrace McDonald’s? When I was in Leiden, I had to constantly dispute the notion that the Big Mac and Whopper were daily staples of American meals.

“So what do the Dutch think of Americans?” I once asked my friend Ernst from the university.

“That Americans always eat at McDonald’s, drive big cars and are fat,” he said. I made it a point never to eat French fries around Ernst.

Six years later, I found Happy Meals were as prevalent as Heineken. This made me more determined than ever to find quality, cheap yet unique places to eat. 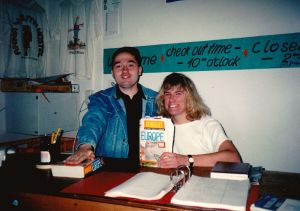 With the owner of one of the many hostels I checked out. © Stephanie Glaser

“Actually, Steph, the restaurants we already have in the Amsterdam section are fine.” My editor, Chris, thwarted my efforts at finding new places when I called to check in with him at the Berkeley headquarters. “Just make sure the restaurants are still there, and check the hours.” 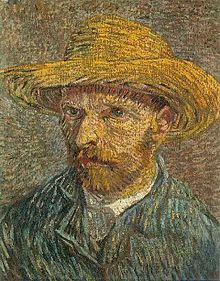 Well, surely, I could write insights about the museums. Holland cranked out many renowned painters such as Rembrandt, Van Gogh, Mondrian, and Toorup. I had taken a Dutch art history class and recalled some of the important periods of art production, and I could talk to the curators or staff to provide extra details on the museums. However, my research inquiries sounded something like this:

“Okay, so the Rijksmuseum is open Monday through Saturday 10 a.m. to 5 p.m. and Sunday 1 to 5 p.m. Great. And you guys are open on holidays, too. Right? Tell me, is admission still f11. Oh, it’s now f12.50. Super. Thank you.” Maybe I could provide insights on the wheelchair accessibility and student discounts.

The 1995 Berkeley Guides neglected to mention the Keukenhof, the largest tulip garden in the world. It’s basically the Disneyland of the Netherlands. My astonishment at this glaring oversight inspired a mission to tell all the 18-to-24-year old backpackers about this place. I had visited the garden with my American friends during the height of the tulip season in 1989. 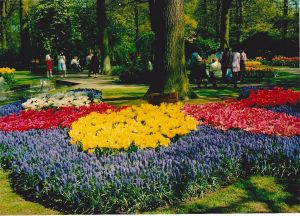 The gardens were spectacular — with tulips and other flowers of so many colors — colors I wasn’t sure had names, except perhaps in a J. Crew catalog. I had never had a green thumb and never cared about gardening, but after visiting the Keukenhof, I vowed I would water my plants faithfully. The Keukenhof needed to be in the 1996 Berkeley Guides so I crafted an entry.

After arriving in the Netherlands, tourists typically head to two places in particular. The Red Light District and/or the Keukenhof. The Keukenhof (Lisse, tel. 0252/19034; open third week in March to third week in May; admission f16) is a huge garden park with flower exhibits of more than six million tulips (plus narcissus, daffodils, hyacinths, and other bulb plants) coming in almost as many colors. This beautiful place provides everyone’s traditional image of Holland multiplied over 70 acres.

Even if hemp is your favorite Dutch plant, you may feel the urge to put on some wooden shoes and hang out at a windmill after visiting the Keukenhof. Located in Lisse, the garden is a 25-minute trip from Leiden. Bus 54(5-strps) runs regularly to the park from the Leiden train station.

For its presentation in the book, the Keukenhof definitely deserved to be set off in a special sidebar — at least a half-page shaded box. After sending my entry to Chris, I called him to find out the specifics. He broke the news to me.

“Hey Steph, thanks for the write-up on the Kookoo hop — how is it pronounced?

All my research. © Stephanie Glaser

Actually, though, we don’t have room in the Netherlands chapter to include it. Fodor’s cut 24 pages from the book so we’re axing space from the chapters on the little countries because we figure more people are going to Germany, France and Great Britain, anyway.”

Wow. This was insulting not only to the 1996 readers but to Holland, too. I couldn’t believe that the Keukenhof wouldn’t be included. Sure, readers wanted to know how to get to the Heineken Brewery, Red Light District, and perhaps the Anne Frank house as well as some museums, but who wouldn’t want to see tulips in Holland?

This was not going to be the Netherlands I knew. Feeling as if I was betraying readers, I didn’t want my not-yet-existent travel writer reputation scarred. Maybe I should have my name omitted from the chapter. And I could only imagine the decimation that the Luxembourg chapter faced.

But I was not a travel writer – at least not the kind I wanted to be. The innerworkings of Dutch culture and the adventures I had experienced, were not to be part of the content.  It was my duty, my responsibility to accurately inform the travelers of 1996 of the times they could visit museums, the costs of hostels, and the procedures for taking public transportation.

Better get a lock for the bike © Stephanie Glaser

More a “travel updater,” I would educate 1996 travelers with a few helpful tips. For example, anyone renting a bicycle should rent a lock as well. Bicycle theft in Holland is rampant, and some Dutch commuters think nothing of lifting an unattended or poorly secured bike.

Also, the Heineken Brewery is an incredibly popular sight so visitors should arrive at least a half-hour to forty-five minutes early to ensure a spot on the tour.

Now more than 15 years later, I proudly say that I fact checked for Fodor’s. Maybe someday I will follow the path of travel writers like Susan Allen Toth, Bill Bryson or Paul Theroux and ride the Trans-Siberian railroad — only I won’t list the timetable. 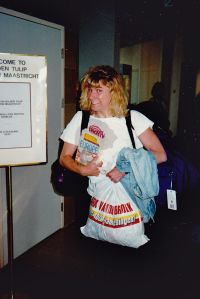 7 thoughts on “Travel Oops — Should I add McDonald’s to the Guidebook?”