Embracing the active, outdoor lifestyle seemed like a great idea when I first arrived in Colorado for a visit.

However, after a few weeks, while white knuckling it on a mountain bike ride, I started thinking that maybe listening to some John Denver while drinking Coors Light was a better idea.

It’s actually best not to know anything about a mountain bike trail before riding it. Ignorance, while not bliss, is definitely an advantage when it comes to participating in an extreme sport.  It’s either ignorance or fearlessness —and — since I am not fearless by nature, at least I was clueless. In fact, I was completely clueless about what I was in for.

Most of the Crest Trail, which runs along the continental divide in Colorado, is considered to be “singletrack,” a dirt path not much wider than the bike.  When you’re riding downhill next to a sheer drop off on three inches of trail that goes over rocks and tree roots, it seems more like “tightrope trail” with no net.

I imagined riding a bicycle on a very high balance beam with boulders stacked in the middle would be a very similar scenario. However, gym mats are not present to break your fall. I mentally prepared to perform a double front handspring over my handlebars. 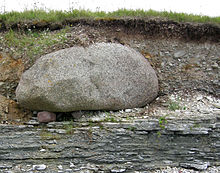 This seemed probable as I encountered a large tree branch lying in the middle of the trail and then a boulder, or was it a grounded meteor? And, next, out of nowhere —a frigging rock quarry appeared. “Doesn’t anyone groom the trails?!” I screamed out loud to no one in particular since my new friends who had invited me on the ride had sped ahead long ago.

Essentially, what I wanted to know while I traversed the various paths and chutes of The Crest Trail was did they have catchy names like ski runs and amusement park rides?  A few came to mind.

I know I hit “Cranium Crusher” and the quarry had to be “Flinstone Field.” Definitely “Skull Skidder” was along the trail, and who could forget “Backbone Breaker?”

Of course, overall, the trails themselves had names. Salida, the town where I stayed, was full of avid mountain bikers who routinely dropped names of the many trails they had ridden. The reaction of others varied according to the name of the trail. “You rode the Rainbow Trail today….great day for it. How was the view?”  Castle Gardens, nice. Did you walk it at all? The Blood Trail….man, you did the Blood?” Was there blood?”

It’s all in the name. Actually, once I heard a local ask a fellow biker whether the Blood Trail really lived up to its name. The response she received: “Well, what do you think? It’s not called the Cupcake Trail.”

I finally caught up to my friends at a stopping point. “Are we almost at the end?” I asked, “Was that the worst portion? Have we passed the hardest part?” I guessed “no” when they evaded my questions and mentioned that I should look forward to the natural spring where we could gather fresh mountain H2O for our water bottles.

Somehow that news brought little consolation. Additionally, taking a swig of water became impossible because it interfered with the intake of oxygen — especially after going uphill. Suddenly, oxygen becomes more vital than ever, because there isn’t as much it at 11,000 feet. 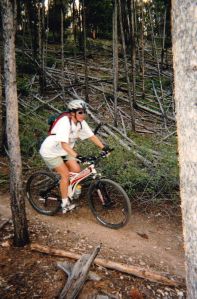 Back on the trail and riding alone again, I cursed mountain biking and damned its creator to hell.  “Who was the idiot who decided that asphalt isn’t challenging enough or good enough for riding a bike?” I asked out loud again for a nonexistent audience.

My fellow bikers had told me this was supposed to be fun. Right. “Fun” must come later when you’ve ridden so many times and broken so many bones that your body, held together by one big stitch or metal rod, is immune to further abuse.

Or, “fun” happens after you’ve finished the trail and had enough beers to numb yourself as you rehash the ride — already repressing hellish memories. Yes, “fun,” I do not believe, is a common adjective beginners use when describing mountain biking. Especially:

• When you’re wondering if you’ll be able to find the North Star later to guide you down the mountain because you won’t finish the trail in daylight.

• When you ricochet off boulders, becoming a human pinball.

• When you have to get off your bike only to haul it with you through a nearly impassable route (e.g. Flinstone Field.)

Just when I vowed I would never again participate or support the existence of this lame sport, The Crest Trail widened and options became available. Although eating gravel remained a reality, I actually avoided larger rocks and obstacles. This was the most hopeful trail patch yet. I could deal with this. After rounding a corner, I heard faint cheering. It was my friends who I thought must have ditched me.

Was I at the end of the trail?  Could it be over or was this a cruel joke and was “Psycho Switchback” just around the bend?  No. It was really over. I had just done the Crest Trail. 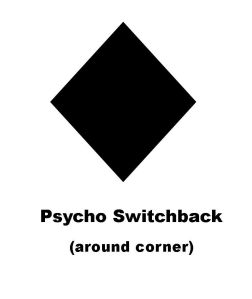 Sure, I hiked a great part of the trail lugging my bike — ready at any moment to pitch it. And, yeah, I fell at one point — scraping up my arm. (I lacked the momentum to jump a rock since I rode too slowly.) But, of course, these details did not need to be revealed. 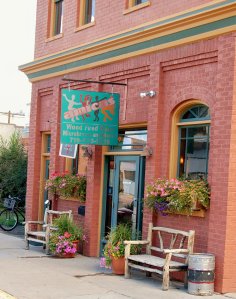 After arriving back into Salida, I proudly gimped into the local brewery to order a beer and display the burgeoning bruise on my forearm. Normally, I’d be mortified to be seen with sweaty hair pasted to my forehead, gravel stuck to my skin, and lycra shorts gripping my butt, however, in my mind, I looked like a local. However, I still had a strong conviction that the sport was fit only for someone who fell into the cuckoo’s nest.

By the time I consumed a couple of beers, my bruise evolved into a puffy purplish patch of skin. I made damn sure it was visible. “Oh, this little scrape….nah, I barely felt it. I got it on the Crest today.  Yeah, The Crest. It was awesome. No, I’ve never done it before. It was my first time. Very challenging, yes, but fun, indeed. Yeah. 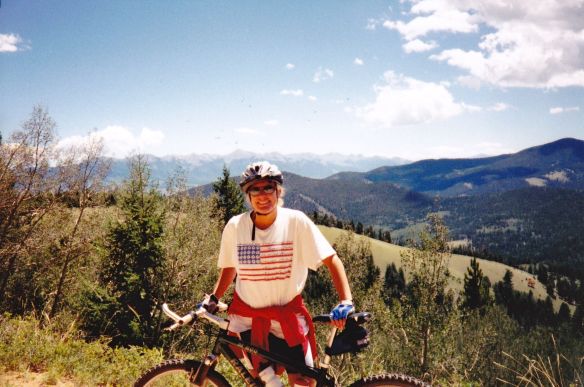