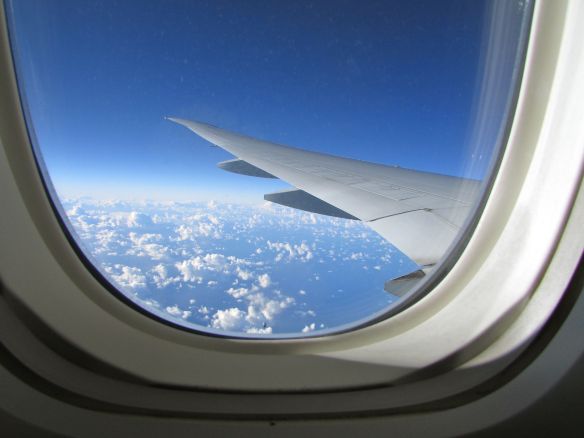 Two things you automatically have going for you when you’re a foreign exchange teacher and things go wrong:

1. You are foreign and your manner is often chalked up as being an unfortunate result of your nationality.

2. Eventually you will leave the country.

Ultimately you can get away with being strange or a little bit crazy. Even better, if it’s necessary, the excuse that you’ve moved to another country can legitimately be used.

I suggested that my principal use that very excuse on my behalf the next time Gertrude Brown called to demand I give her $1,000. In two weeks, I would be returning to the United States after one year of teaching in Adelaide, South Australia. So, indeed, I was leaving the country. Maybe that knowledge would finally shut Trudy up. 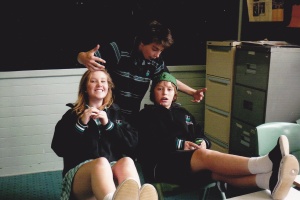 Early in the 2010 academic year, I had confiscated her son Trent’s mobile phone after he took it out during class to text and show it off to his classmates.

When Trent, who was a whinger to begin with, argued that I had no right to take his phone, Mitchell, the class clown, piped up, “You know she told us we can’t use mobiles in class, Trent.”  Ignoring that Mitchell next leaned back in his seat and placed his feet up on the table, I stood in front of Trent with my arm extended, palm upright.

Typically, students banded together when one of them was about to have his or her phone taken. Not this time.

“Okay, guys, guys…thank you, but Trent is going to give me his phone,” I said trying to prevent them from jumping him to get the phone. “Aren’t you Trent?” I raised one eyebrow, probably looking somewhat like the Church Lady from “Saturday Night Live.” 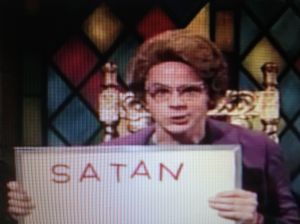 The rest of the class waited. Silently. It was the first quiet moment all day. Trent finally handed to phone over, and I returned to my desk to put it in a special bin I kept for school supplies and confiscated mobiles. Already a few rested at the bottom of the bin.

Texting and using mobile phones was rampant with my year 8s. The problem was that they were really bad at stealth texting. Typically, a year 8 who is committing the “crime” has the phone in his or her lap lap, stares at it for a few minutes while typing and sending a message, and then, the student slowly raises his or her head to meet a teacher’s all-knowing gaze.

Also, because texting requires fine motor skills, it’s easy to detect muscles at work. You just need to walk by and look at their forearms. The fact they believe their actions will go unnoticed proves that kids really do think teachers are bricks.

“Okay. There are only two reasons why your hands would be in your laps,” I said once to the whole class. “And neither one is appropriate for school.”  Due to the unhinged reaction from my year 8s, I discovered early on that this statement works better with older students like the year 11s I taught back in the US. 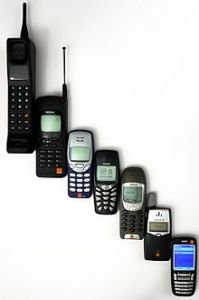 At any rate, it was so easy to bust kids. I once spotted a girl blatantly texting in the front row of class. The phone was completely out in the open. “Roxy,” I said. “What are you doing?”

“Texting, Miss,” she didn’t look up and kept typing away.

“Excuse me, but you know the rule about mobiles. Now give it to me,” I leaned down closer to her to try and be intimidating.

“In a minute, Miss,” she said looking up at me and holding my gaze. She was smacking gum at the same time.

“Would you like me to call your mum?” I said trying to stare her down.

“This is me mum, Miss,” again she looked me straight in the eye.

“Now, Roxy!” I hissed and held out my weary hand.

She looked up at me, pulled on the top of her already partially unbuttoned plaid uniform and stretched it forward. Then, she took her phone, showed it to me and stuffed it directly into her bra. “Come and get it,” she said calmly smacking her gum.

“OUT!” I just pointed to the door.

That was the worst case scenario. Usually, I merely confiscated four to five phones a class period. I would hold them in my hands at first while I paced up and down the middle aisle of the classroom just as a reminder. Eventually, I would put them in my bin. This was a big mistake as I would find out. 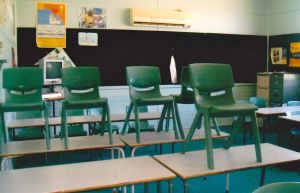 Unfortunately, at some point during the same class in which I took Trent’s phone, another student stole the contraband from my desk. I didn’t discover this, however, until the end of class.

After the bell had rung, the kids who wanted their phones approached me. I handed them back, but Trent’s was not among the mobiles.

We searched and even some of the other texting troublemakers helped us look.

“What the hell?” I said as I looked through drawers and pushed papers off my desk.

“Trent, I don’t know what to say,” I said after the other students had left.

“My mum is going to kill me, Miss!” He actually started crying and then sobbing. “It’s my sister’s phone.” Because he was already an awkward, gangly teenager, the crying made the moment more of a cringer. Normally, Trent annoyed me just with his whiney voice, cracking though various octaves. 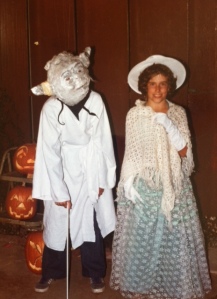 I’m the Jedi master on the left next to my sister, a southern belle

However, in a moment, I was back in seventh grade at Santa Barbara Junior High in 1981, tripping on the last step leading up to the auditorium stage that was a makeshift runway for the Halloween costume contest. I had entered to show off the paper mache Yoda mask I had made. However, I wasn’t even up on the stage before everyone started laughing. I got up, stepping on my Jedi robe. When finally upright, I was so embarrassed that I pretty much ran off the stage. I turned briefly to look at the crowd. I don’t even know if they saw my mask.

Remembering how brutal adolescence can be, I felt bad for Trent and contemplated whether or not I should give him a hug. His gulping breaths started sounding like backup seal lion vocals on a SeaWorld soundtrack. No hug. I couldn’t manage it.

“Let’s call you mum, Trent,” I said, not any more excited than he about the phone call.

Trudy was furious, “You see Trent borrowed his sister’s phone to feel more accepted,” she condescendingly stated. “He’s having difficulty with fitting in.”

Well, I couldn’t argue that point, but a red flag waved wildly. Clearly, there was a problem if mum sanctioned phone use in class for Trent to feel like he belonged. However, the way Trudy was going off on me, I figured it wasn’t the time to give her parenting suggestions.

“I expect to be updated on this matter every day until the phone is found,” she said as she hung up.

At the end of the next day, when I was in the staff lounge, the secretary Lina, a lovely motherly woman, came to find me.

“Steph,” she said in her soothing voice that really should be incorporated into some type of hypnotherapy audio CD series, “I’ve got Gertrude Brown on the phone for you and she sounds a bit upset.”

I rolled my eyes and Lina nodded sympathetically.

Answering the phone, I said in an overly sweet manner that almost had the twinge of a US southern drawl. “Hello, this is Stephanie.”

It was hard to crack through Trudy’s tirade. She essentially accused me of being responsible for the phone’s disappearance. 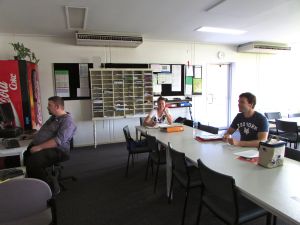 “Excuse me, Mrs. Brown,” No more sweet southern drawl. I was pissed. “But I was very clear with my phone policy, which is consistent with the school’s. I have confiscated phones many times in the US, and I’ve never had this problem.” A few of the teachers nearby at computers looked over in support.

“Really?” she said with a genuine hint of surprise.  I would have thought it was the opposite in America.”

With that last statement, which I really didn’t take offense to, I replaced “southern hospitality” with New Jersey in rush hour traffic. Here was my chance to be a crazy American.

“Look Trudy, Trent was not supposed to have his phone out. It was taken and I’m sorry that it happened in my class, but it wasn’t my fault, and let’s face it — if someone was targeting your son, it would have happened anyway. So you will NOT put this on me,”  I had to take a deep breath and I could feel my temple veins pulsing and spreading heat with every word.

Mark Bullen, who was a year 11 coordinator and probably heard parents bitch all the time, was looking at his computer screen typing and smiling away. 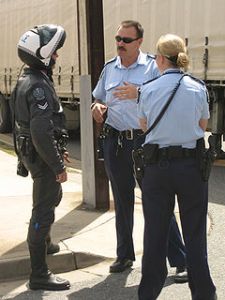 “Well,” said Trudy. “I have called the police on this matter, so I expect they will be talking to you soon.”

The next day, at the same time in the afternoon, Lina leaned into the staff lounge. “Steph, dear,” she said in almost a whisper. “I’m afraid it’s Gertrude Brown.”

It was rush hour in Jersey again. “Yes, Trudy,” I answered.

“Have the police come by to investigate yet and question you?” she asked.

I genuinely loved the school where I was placed. The staff had welcomed me as one of their own and I had tremendous support. However, we all taught at a school where fights happened regularly, windows were often smashed and cyber bullying was on the rise. Just the other day, I had acted as a witness while a police officer took a statement from a kid who knew about some lockers being bashed in and all the contents stolen.

“No, Trudy, the police haven’t been by. They have been busy with other incidents that are far more serious. I don’t think a stolen mobile is high on their list right now,” I rather liked my new brash personality.

Trudy couldn’t seem to think of a comeback. “Well, I hoped you’ve learned a lesson in all this.”

“No really, Trudy, I hope you and your son have learned a lesson.”

I didn’t hear from Trudy again until the end of the year. I had assigned a project to my students that involved making “tarot cards” or symbolism cards with various significant items or characters from The Outsiders by S.E. Hinton. The Trudinator called to tell me she had a problem with this assignment.

“Our family is not into the Occult,” she said. “Trent must have an alternate assignment.”

“Look,” I answered. “This isn’t voodoo; it’s meant to be a fun art assignment.” It really was, essentially, a coloring assignment. “And yes,” I said since I could sense Trudy gearing up. “Trent will have a paper to write instead.” I don’t think Trudy even cared that this would be more work for Trent.

I’d like to think I scared her off, and that’s why she called my principal at the end of the school year instead of me to demand I give her money for the long gone phone. “I’m sorry, Mrs. Brown. She’s left the country.” 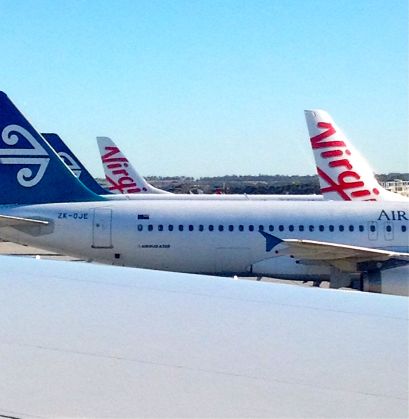