This is sort of the hippie make-love-not-poop (but if you do, it’s okay) sign.

From gentle reminders to accusations of destroying civilization, signs are everywhere prompting people to clean up their dogs’ poops. (Sérieusement, Paris, France, écoutez-vous?)

There are the official signs that say dog defecation is a health hazard and a degradation. Let’s face it. Dog poop (like any other kind) is certainly unsightly.

It’s interesting that someone tagged this sign with a “Liberty” sticker right underneath the dog.

Hotchkiss, CO, decided that pretty much everything is a threat to the town.

I also wish the city officials would use commas or dashes like the sign above, because if you are just glancing at this “Dog Waste” sign, the last line looks like Hotchkiss is claiming to be a disease ridden town.

Whoa — ease up crazy canine owner. This poor dog is not only a menace to society but is clearly in a choke pull by its owner.

It’s not like there aren’t disposal methods either — take, for instance, the environmentally friendly “Mutt Mitt.”

Really, could there be a better solution?

It’s as simple as one, two, three…

This is my all-time personal favorite dog poop sign. It has quite the clear and reasonable message from motel owners just on the outskirts of Boulder, Colorado.

The motel owners strategically placed signs on every bench outside each unit. 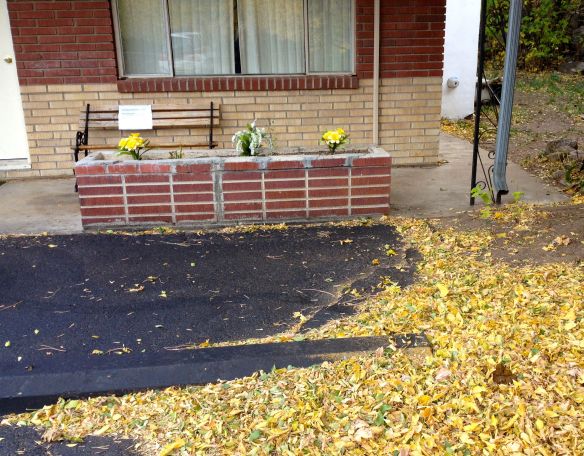 To no avail. Right across from a sign a big St. Bernard had left a “steaming pile” for the owners of the hotel (see far right of the photo).

Alas, the efforts were all in vain. A St. Bernard (I saw him do the deed — but unfortunately, I didn’t have my iPhone handy) left a nugget in the golden leaves.

15 thoughts on “Signs of the Times: Travel Poops (sorry, I couldn’t help the pun…)”