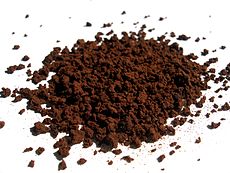 The crystals before they work their magic. @Editor At Large

Dipping a teaspoon into the plastic jar and scooping out the sparkly, gravely grounds, I added them to a boiling cup of water and watched the particles dissolve into dark brown ribbons. It took about 30 seconds.

This was not right. The dark brown steaming liquid was ready in an instant as it promised — like a powdered NASA beverage. It was not coffee; it was — Nescafé.

Having arrived in Kiev late the night before, I was tired and desperate for some caffeine. I looked through the cupboards and fully stocked refrigerator of the apartment where I was staying and found nothing else resembling coffee. And this apartment was set up. The refrigerator housed what looked like two frosted glass sculptures full of Ukrainian vodka, international meats and cheeses that could have been part of a catering tray from a UN smorgasbord, fresh bread and bags of luscious red tomatoes. So how was there no bag of ground goodness in there?

And it wasn’t just the taste, I hated the idea of instant java — no grinding of beans; no brewing; no aroma wafting through the kitchen while you try to wake up; no holding of the cup to warm your hands.  Just dump some coffee flakes — I mean ‘crystals’ — into boiling water. It was almost like adding fish food to an aquarium. Where was the ritual in that? Drinking coffee is sacred in some countries. Was a coffeehouse close by? Surely Starbucks was somewhere in Ukraine’s cosmopolitan capital city.

Ed and Judy at breakfast, enjoying a delicious spread, including Nescafé.

I hated to succumb right away to an American chain, and really, it didn’t matter. With a busy day of sightseeing and cathedral hopping ahead, there was no time to find one anyway. My parents Ed and Judy had treated me to this trip to Ukraine. Their neighbors, David and Tamara, lived part time in Kiev and had invited us to visit. In addition to putting us up in their guest apartment and stocking the fridge (albeit without real coffee), our generous hosts had hired a driver and tour guide to take us around. Consequently, we had a completely booked day. So, it was either go on Nescafé or run on no caffeine at all.

Nescafé sufficed. In the meantime, Kiev captivated me, so I was too pre-occupied to look for a Starbucks. While getting a lay of the land, I marveled at the range of colors the city displayed. The blues, alone, impressed, including the Wedgewood baby blue of St. Sophia’s Cathedral to the domed sapphire blue of St. Nicholas Church. The gold onion shaped spires on the stately Orthodox churches glittered in the sun. Then the burnt orange of Taras Shevchenko National University of Kyiv’s main building created a sort of Southwestern US feel. It was summer so the foliage was vivid green while red flowers bloomed, lining sidewalks.  Even the mini Eastern Euro cars sported vibrant paint jobs.

Ukrainians’ moods seemed to match the lively hues. Military recruits in camouflage yucked it up outside their academy doors before presumably entering for drills and classes. Storekeepers smiled and waited while I tried to say “thank you” in Ukrainian. With a great sense of humor, our tour guide, Natalia, laughed often. Babushkas waved at us as they walked cows down a dirt road in the Ukrainian countryside.  Everyone seemed pretty happy and content.  What did I have to complain about?

The apartment we stayed in is on the far right.

So what began as reluctantly spooning the granules into a mug of boiling water every day, became routine. Nescafé no longer seemed like a caffeinated catastrophe. While I sipped it every morning for five days, I looked out of the tenth story window of the apartment. I saw Ukraine wake up, too. As the sun rose steadily, Kievans emerged from the metro and bus stops. The recruits again milled about outside the academy before their training began. A lineup of cars inching to their final destinations marked the start of rush hour.

But the most eye-catching detail out of the window was the metal statue of a woman with her arms out-stretched over the landscape. Affectionately called “Baba” (short for Babushka) by Kievans, she is Ukraine’s lady liberty. A part of Kiev’s war memorial, she seemed to embrace every morning as if she, too, had just had her cup of coffee.

However, I knew Nescafé was my “Taster’s Choice” when we went for a drive in the Ukrainian countryside and stopped at a petrol station.  I could feel the comatose coming on, so I got out to stretch my legs. Wandering inside the adjacent convenient store, I saw, on full display, a Nescafé station to make coffee and dress it up with milk, sugar or whatever enhanced the beverage. Just seeing the option, perked me up, and I went over to get my new source of instant gratification.

Then days after returning to the US and browsing through the aisles of Wal-Mart, I spied a jar of Nescafé.  I bought it.  Making it the next morning, my thoughts went right back to Kiev and the view of Baba from the tenth floor. 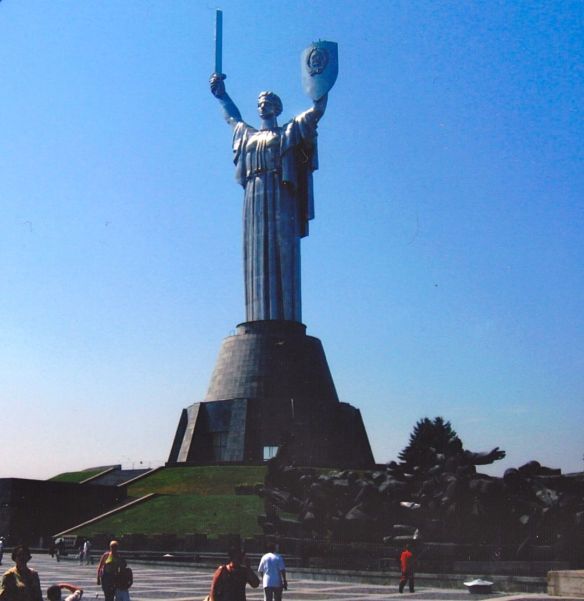 16 thoughts on “Travel Oops: Seriously, Do I really like Nescafé?”