She was stunning. And, for all practical purposes, I was stalking her. Moving past a lineup of tarnished, stationary yet imposing tanks and helicopters leftover from the Vietnam War, the woman wore a long sleeved neon yellow tunic dress fitted over flowing white trousers that barely revealed the tops of pointy kitten heeled shoes. Although in full 2014 vibrant color, she looked like she came straight from a black and white photo shoot for a 1960s Life magazine pictorial of Saigon.

This was my first up-close sighting of a woman wearing an ao dai, Vietnam’s traditional, elegant high-collared dress with slits up the sides that is typically worn with silk pants. 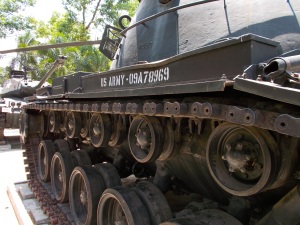 In the courtyard of Ho Chi Minh City’s War Remnants museum, I first pretended to be examining a tank, US Army 09A78969, and then moved closer to a wall displaying bold primary colored propaganda posters. I scrutinized one featuring Ho Chi Minh as if I was completely literate in Vietnamese. Really, I was just working up the nerve to ask the woman in the ao dai for a photo.

She was standing with a man who wore a polo shirt, khakis and had a camera dangling from his neck. Since we were at a museum, I assumed he was a tourist and the woman was possibly his guide — especially since she gestured toward the tank while she talked to the polo man. In a quiet moment, I finally approached her and asked if she spoke English.

“I just love your ao dai,” I stammered like she had just agreed to accompany me to prom.

“You look so beautiful in it.” I added.

“I’m going to have one made in Hoi An,” I babbled incessantly, a nervous habit. “Can I ask you if you like wearing the ao dai?”

“Yes, it is very special in Vietnam,” she responded, standing with ramrod straight posture. “It is part of our image.”

That was certainly true, and as I would find out, the iconic image of the ao dai graced everything from ashtrays, magnets, playing cards, and postcards to decorative ceramic vases and embroidered silk wall hangings. I even saw a plate with the backside of a Beyonce-esque, Vietnamese woman with a bodacious booty.

It seemed ironic to take a photo of the ao dai woman posing next to military durable goods. For Americans, at least, the Huey helicopter, in particular, and the graceful ao dai are contrasting but lasting images of Vietnam. No Vietnam War movie is complete without an appearance by both.

The bright yellow ao dai seemed appropriate and a match for the energy and progress emanating from Vietnam. The shiny silk certainly popped against the drab, tired and angled war machines.

“Is it very hot?” I asked next since she sported the long sleeved ao dai version, and in the heinous humidity, I was a soggy mess in just a tank top, floral skirt and flip flops.

She paused, tilted her head a bit and said, “It can be warm to wear.”

Standing next to a military lifeboat, the tour guide posed as the Saigon breeze lifted her lustrous black hair then laid it back over her shoulder showing more of the mandarin neckline of her ao dai. The moment looked almost like a shampoo commercial. Oddly the metal zippered clutch she held in both hands mirrored the color of the boat and its rivets. She flashed an experienced smile that said, “this is not my first photo shoot, but I am good sport and will humor you as a live postcard.”

Indeed, she not only looked like a postcard but also an illustration that I had looked at over and over ever since my parents bought a full set of the 1979 World Book Encyclopedias. The Ci-Cz volume contained a feature spread on “Clothing.” In addition to facts, history and photos, the section offered four pages of illustrations, showcasing traditional attire from countries around the world.

The Asia page, in particular, inspired me. Who wouldn’t love to wear the Japanese Geisha’s robe-like, wide armed flowered kimono? And the Indonesia illustration highlighted a remarkably impressive dancer who practically did the splits in an ornate golden embellished headdress and bold orange scarves. The Burmese models looked positively regal holding parasols while in their long sarongs and button-up shirts.

But it was the Vietnam illustration at the bottom of the page in the middle that always kept my attention. The Vietnamese woman in the picture looked especially fetching in a red ao dai and white pants. She even had a conical hat with a delicate silk chinstrap. The ao dai immediately appealed to me with its compromising nature. It was a dress, but you could wear pants underneath it. Required by my mom to wear one every other day in school, I hated dresses. The ao dai was the answer. I knew I had to get one some day.

After my encounter with the woman at the War Remnants Museum, I soon learned that the ao dai, today, while revered and treasured, is worn mainly by women in the tourism industry — women who work for hotels, airlines, museums and information centers. Kim, a petite clerk at the gift shop of Reunification Palace, wore a lovely lace ao dai with shorter sleeves and her hair was chicly gathered into a high bun. Again a glistening, sweating mess, I approached her. She fanned me while I asked her questions including whether she liked wearing the ao dai.

“It is hot,” she said. And since I wasn’t sure whether she was talking about the weather or the ao dai, I asked for clarification. She nodded.

After leaving the palace, I went across the street to a lush park and plunked down on a bench in the shade. It was time for the silk fan I had purchased the day before from a disabled teenager who walked with his hands. Having experienced the exhibit “Agent Orange and its effects from the American Aggressive Campaign,” at the War Remnants Museum, I bought the fan at his asking price and didn’t bother to bargain for it. After a while, seeing anyone who has a disfigurement or something not quite right, you assume that person is a victim of the deadly defoliant that the US dumped on much of Vietnam to disintegrate the jungles and reveal the heavily concealed Ho Chi Minh Trail.

Fanning myself while sweat droplets fell on my Reunification Palace tourist brochure, I watched two women sit down on a pathway curb. They both wore ao dais and appeared to be taking a break. One donned a Pepto pink long sleever and the other was clad in a powder blue ensemble. The woman in pink took off her mid-heeled shoes, discarded them on the asphalt path and checked her cell phone. Her friend lifted a Styrofoam box and began eating noodles from it. She wore an oversized cotton hoodie over her gown, making her look like a Vietnamese hip hop diva. How could they sit on the curb like that? Wouldn’t the beautiful ao dais get dirty? And why would anyone want to cover up the glamourous iconic garment with a cotton sweatshirt — especially in the heavy heat? It wasn’t quite the serene image I kept seeing in keychains and tote bags.

Leaving the park and getting into an air-conditioned cab, I gazed out the window while sticking to the leather seats. It was May and the end of the school year in Saigon. Jackpot. Something caught my eye along the busy street: a graduation ceremony spilled out of a high school onto the sidewalk. Hundreds of girls wore brilliant white ao dais and laughed while younger high school kids stood by in their white button up shirts, ties, heavy black shoes and blue pants or skirts. The students clad in traditional dress almost looked like a lineup of karate kids who were waiting for their delinquent Sensei to arrive and hand out their black belts. I almost asked the cab driver to stop, but jet lag and the air conditioning kept me in the vehicle.

Graduation, along with other ceremonies, celebrations and holidays definitely marks a time when women wear ao dais. At a HCMC art gallery, I met and spoke with an opera singer and director of an artists’s association about ao dais. She said her artists at the opera house often greet tourists while dressed in ao dais. The opera singer also wears the traditional dress. “I want to show Vietnamese culture,” she said. “It’s pride.” 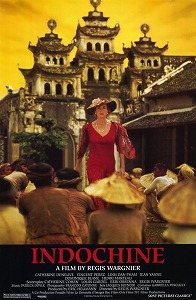 When I mentioned I was going to get an ao dai on my trip, she replied, “If you would want to look wonderful in ao dai, you have to dye your hair.”

For a moment, I was crushed. What? I wouldn’t look like the World Book woman? It was true. Logically, of course, I knew that, but somehow in my imagination, I would have a delicate frame and shiny, flowing black hair. I suppose, with my grey, I would resemble more of a French colonial expat wannabe Saigon siren named Fifi, ready to help Catherine Deneuve pack her opium pipe or tap rubber from her plantation trees in the movie “Indochine.”

To be continued in another post that details buying and getting fitted for an ao dai in Hoi An.

5 thoughts on “On an Ao Dai High in Saigon”