As always, when you attend a conference and fill out various forms, you eventually end up on several e-mail and newsletter lists. I went to a travel writing conference in August 2014, so when I opened an e-mail this past October and first scanned it, I thought it was a solicitation to pre-order The Best Travel Writing vol. 10 published by Travelers’ Tales. But then I read the message again and again.

We are interested in including your story in our forthcoming book, The Best Travel Writing Volume 10, edited by James O’Reilly, Larry Habegger and Sean O’Reilly, to be published in January of 2015.

Enclosed is a copy of a release. If you agree with the terms, please print two copies, then sign and return both copies to me (via email or snail mail). A countersigned copy will be returned to you with your check upon publication.,,,,,

The published book finally came in the mail this month, and I just held it in my hands for several minutes, looking at the front and back covers before I even cracked it open to find my story. I have to say that I had submitted “I Have a Problem with the Blood of a Woman” to a few different publications both print and online a few years ago. And it was rejected each time. So I posted it on Travel Oops back in April, 2013. The response was positive, and it motivated me to submit the story to Travelers’ Tales.

I’m ecstatic to have the story included in the Best Travel Writing anthology. In fact, I thought I might jinx things by talking about it much before I actually saw my story in print. It’s now in print and I’d like to raise a glass to the Word Press Community, travel and my original post. Thank you! 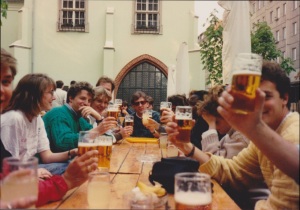 For old time’s sake (and because I don’t have a new story ready) here it is:

“I Have a Problem with the Blood of a Woman”

Stationing myself next to Ba-Ba-Reeba’s restroom, I stopped every woman who entered and asked, “Perdon, tiene usted un tampon? TamPONE? Tampax? Playtex? Kotex?”

Just moments earlier while enjoying a beer and tapas at the Barcelona bar with some Americans I had met on a train from Madrid, I discovered the added company of my period.  Yikes — my supplies were a few miles away back at a pension off Las Ramblas. I asked my new friend Allie if she had a tampon. Nope.

Back in the bathroom, there was no dispenser in sight, and no one who came in seemed to have any spare tampons or pads. Didn’t anyone carry backups?  It was time to act since I didn’t want my only pair of jeans to be ruined. Leaving Ba-Ba-Reeba, I searched the streets near Plaça de Catalunya. Surely, Wal-Mart had invaded Catalunya.

It was siesta time, and the nearby shops and stores were closed while shopkeepers observed the afternoon break. It seemed inevitable. I would have to approach the intimidating women of Iberia on the streets.

Feeling grande (on the right).

After arriving in Spain…

For the past few days, I had lumbered past elegant Spanish women who sauntered with precision in the highest and thinnest of heels along the city streets, avenues and cobblestoned alleyways of Barcelona.

It began the day I emerged from the train station, Estacio Sants, and tied my rumpled denim jacket around my waist, hurled my dusty duffel bag over my shoulder and trudged forth in my burley velcro-adhesive sports sandals. I felt large. Grande. Muy grande. 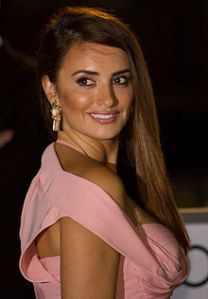 Spanish women, generally speaking, can make you feel like you have a permanent personal flotation device secured around your waist and not just junk in the trunk but the whole junkyard back there. Think of standing next to Penelope Cruz — many Penelope Cruzes.

Clad in posh tailored jackets and short skirts that never appeared to crease, wrinkle or ride up to expose cellulite, the young women of Barcelona looked like they were constantly working a Catalan catwalk. Their polished appearance included the perfect application of makeup, too. Long ago, I accepted my “dewy” complexion. I never once, however, saw shine glistening on a Spanish woman’s T-zone.

As an American woman and solo traveler, I had assumed that I was stronger and more independent than most European women. In a troubling development, strength and independence took a back seat to beauty. But, seriously, despite navigating in precariously high heels, what made these Spanish women strong and independent? 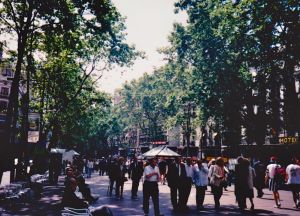 Meanwhile, clodhopping my way along the famous street, Las Ramblas, I looked for a place to stay. Fortunately, the owner of the pension I finally found was a dowdy woman who definitely had settled for sensible rubber soles. She was, according to my brief observations, the only woman in Barcelona with orthopedic shoes.

Back to the tampon search scene…

I stood waiting for some younger women to pass by. Soon, two Penelopes came into view. It was worse than I expected. They both wore the uniform — the tailored jacket/mini skirt combo and strappy heels. Bright red lips and long dark hair that was so glossy I could practically see my desperate reflection within it completed their look. No doubt they were fashion muses. One for Dolce and one for Gabbana.

Did I dare ask them?  Would they recoil at the sight of me? Would I be shunned like a pair of underwear at a young Hollywood starlet’s debut in front of the Paparazzi?  More importantly, would they have a tampon between the two of them in one of the designer reptile skin bags they each carried? I approached slowly, stopped them and then told the muses my situation.

There. I said it.  Because I couldn’t recall learning verbs such as “bleed,” “stain,” or “spot” let alone “menstruate” in my high school Spanish class, I settled for the primitive, yet direct, statement that translated into:

“Excuse me, I have a problem with the blood of a woman.”

The muses looked at each other and then back at me. I was ready for the bitchy blow off.  Instead, one muse took my hand, and the other hustled us down the street in the opposite direction they were traveling. We stopped at a pharmacy that was closed. The two women halted, consulted each other and then pointed to a large distant department store, El Corte Inglés. As they assured me I would find what I needed, I had the feeling the muses would have taken me to Spain’s manufacturing plant of Tampax if they had had the transportation.

I hurried to El Corte Inglés, which wasn’t closed for siesta.  Entering the expansive store, I repeated my blood-of-a-woman saga to a clerk who was working at the cosmetics counter. She immediately took me by the hand. I towered over this wisp of a thing who, despite her youth, looked like a professional chemist in her white lab coat.

I must have looked like a trained circus bear following behind her while we weaved through perfume counters and hosiery aisles to the department drugstore. Taking me directly to the attending clerk, who was with customers at the time, the cosmetics chemist explained my dire situation. In an instant, the pharmacy clerk turned away from her customers and took me to the sanitary products aisle.

I figured then I could take control of the situation, but the clerk took one box after another describing the strength of each one. “Aqui, SOOPER PLOOSE,” she said turning to me and letting me inspect the product. I pointed to the Super Plus box and nodded. Back we went to the register. Ignoring the women who were still waiting, the clerk rang up my purchase, and then she took my hand and steered me in the direction of a restroom.

After the threat of major leakage had passed, I wanted to celebrate the recent show of sisterhood somehow. Surely there was a Catalan karaoke bar where I could meet up with the helpful Penelopes from El Corte Inglés. We could swill beers and sing Helen Reddy’s “I Am Woman Hear Me Roar” or do something along those lines. I would just have to overlook all the fashionable footwear, and that, essentially, in comparison, my feet appeared to be strapped to discarded tire remnants. 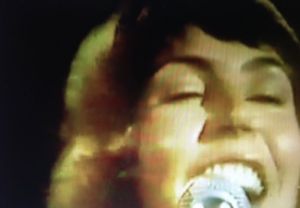