Heads Up:  As you may have guessed from the title, this post contains a bit of profanity — and it’s the big one. I said it — a few times…in front of kids. These definitely were not the finest moments in my career as a teacher. I’m not really proud of what I did, but it definitely makes for a Travel Oops story.

Here I am…calm and collected.

Many teachers, at one time or another, have considered the potentially heavy consequences of dropping the “F-bomb” in class. On the other hand, you also consider the liberation of uttering the ultimate.

Teachers on the ledge may have an interior monologue that goes something like this: “What will actually break me? How will the kids react? How many parents will call? Will I be fired?  Will my colleagues dismiss me or applaud my actions? Will it be as satisfying as I imagine?”

Then there may be the question: “How will I say it?”  Will it be a general question: “What the fuck?” Or a simple declaration: “This is fucked up.”  What about a really risky statement with the F-word that is directed more toward the students? For example: “Don’t fuck with me anymore.” “Who the fuck do you think you are?” “Shut the fuck up.” Or perhaps, simply, “Fuck off.”

My spirited year 9 class on an excursion
© Stephanie Glaser

I answered these very questions for myself, twice, when I was an exchange teacher for one year in Australia. In my own defense, the other teachers at the school where I taught referred to the kids as “feral.” Actually, by the end of the year, I really enjoyed my students and had a great relationship with most of them. Earlier in the year was another story, however. The tension had been steadily building.  I don’t really think there was any way of avoiding the action.

The perfect storm for the deployment of the F-bomb, I’ve discovered, is usually due to being extremely exhausted, teaching an afternoon class, along with experiencing a complete lack of cooperation and respect. Of course, throw in a relentless series of stupid questions or retorts and the reaction is rapid.

“Miss, why did I get points off for not putting my name on my paper?” asked Zack, a bright kid who vacillated between being a good participant in class and a pain in the butt.

“Because, you didn’t follow directions,” I answered while passing back the rest of the few assignments that had been turned in.

“What do you mean?” he asked.  “I followed directions.”

“No, actually, you didn’t.” This was turning into a pain-in-the-butt day with Zack.  “Putting your name on your paper is technically part of standard procedure,” I continued.

“But, you took off five points.” Pain in the butt.

“Yes, I did.” The rest of the class, distracted by their own interests no more, looked at Zack to see his reaction.

“But, you saw me working on it; you knew it was mine,” Zack’s voice was becoming increasingly whinier. I turned back to face him.

“That’s not the point, Zack. You always need to put your name on your papers.”

“I saw him, Miss; that’s his assignment,” said Andrew, Zack’s faithful sidekick, who was usually somewhat respectful. However, he had joined in the growing debate.

“Andrew, this is not about you.” I felt the blood travel to my face and my voice became a bit shaky.

“Look, Zack, I’m sick of getting papers that have no names on them.” Disengage…take him out in the hall to reprimand.

A few of my year 9’s that put me over the edge that fateful day.
© Stephanie Glaser

“Well, you could just ask.” Zack was not going to drop the subject.

“Didn’t you hear me? I’m sick of marking papers with no names on them!” I looked over at both Zack and Andrew, challenging either one of them to say another word.

“Five bloody points…I can’t even believe it. This is so not fair.” Zack crumpled his assignment up and threw it across the room. Five, four, three, two, one…..

“ZACK, JUST PUT YOUR FUCKING NAME ON THE PAPER!”  Blood, mine, definitely pumping.

Next, silence….pure and beautiful silence. All kids immediately stared at me and then turned their heads toward each other.

Jessica, a new student from London, looked up at me and with her posh British accent said, “I don’t think I’ve ever heard a teacher say that before.”

Super. A first from the American teacher. “Well, now you have. Get your spelling booklets out RIGHT NOW and work on them SILENTLY!” I went over to my desk, trying not to be too obvious as I collapsed in my chair.

Strangely, it was kind of a bonding experience. After I regrouped and class drew to a close, I looked at everyone and said (sincerely),  “I’m sorry, guys, about my lack of professionalism today. Zack, I’m sorry that I responded to you this way.”  The next thing he said surprised me.

“It’s okay, Miss, I was being a bit of a wanker.” He actually looked somewhat remorseful.

“Yes, I’ve noticed that.”  Hearing the kids swear was such a common activity that I didn’t even reprimand anyone for it anymore. And one Year 8 had told me, just a few weeks prior to my profane contribution: “You are such a fucking bitch.”

However, time to consider my consequences. I felt bad, but, really, what was the school going to do? They couldn’t fire me. I told the principal, and he just shook his head wearily. The Year 9’s seemed quite supportive of my swearing, so maybe they wouldn’t tell their parents.

Possibly Jess would mention it. Again, not to worry. The British, generally speaking, look down on Americans and think we’re pretty uncouth anyway. I’m guessing their response would be something like, “Poppycock. But it’s not surprising. Americans have butchered and minced our Queen’s English, turning it into rubbish. Why wouldn’t they curse and carry on in class? Oh, bloody hell.” 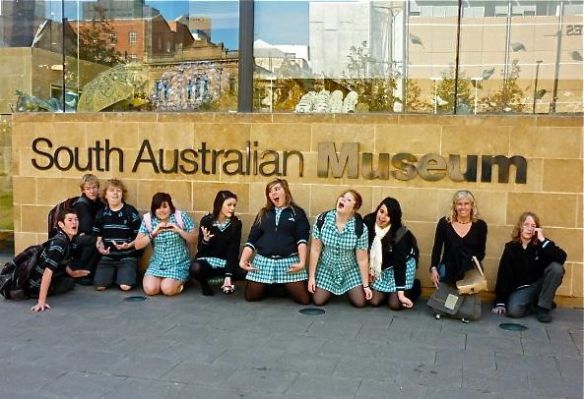 I definitely bonded with my year 9’s and even took them on an excursion into Adelaide.

As I predicted, I didn’t hear from any of the parents of my Year 9’s. Perhaps that is what emboldened me to drop the F-bomb once again – that and another perfect storm. This time it was with Year 8’s. It was one of those days when you begin class, and the students are so distracted and restless that they can’t settle.

So, you do the standard teacher stance, standing ramrod straight with your arms crossed across your chest, looking back and forth at students until they get the hint that you’re pissed off and want them to be quiet. We were well into the third term. I knew what to expect and so did the students, so there was dysfunctional control maintained in my classes.

I stood in the front of the class for nearly ten minutes. Kids were getting out their mobiles, passing notes back and forth, ripping paper into tiny bits, laughing and arguing…It was a free-for-all. Five, four, three, two, one…Under my breath, I muttered, “This is fucking ridiculous.”

Two distracted kids in the front row, whose drama radar kicked in, stopped, turned their heads, faced me and asked, “What did you just say, Miss?”

I looked straight at them and said, “You want to know what I said? Really?” My voice took on a bit of a hysterical tinge. “Well, I WILL TELL you. In fact, I’ll tell the WHOLE class.” The volume steadily rose along with the burning sensation in my face. I may have even sounded maniacal. “Okay, guys, this is what I said. I said: THIS IS FUCKING RIDICULOUS!!!”  Maniacal, definitely.

I could feel myself letting go. Dropping the “F-bomb” was like howling at the moon, or finally getting a good cry. I needed to say it and just get it out. “Oh, and, by the way, fucking is an adverb!” We had just finished a grammar unit on adverbs and the kids couldn’t move much beyond “quickly”, “slowly” and “very.” Maybe they would remember this adverb. Teachable moment, indeed. And, by the way, it was satisfying.

13 thoughts on “Dropping the “F-Bomb” in Class”