Murky, gray water and zero visibility are not the conditions the postcards and the documentaries promise when they feature the Great Barrier Reef. However, the photographers behind the incredible images were probably not shooting during a typhoon.

Interestingly, while the surface of the ocean may be swirling and raging during a typhoon, underneath the water, a certain calm is maintained. Not that the sand isn’t churned up in a messy way. Consequently, Suzanne Miller and her husband, Jason, missed out on the electric colors, crystal blue waters and endless schools of vivid fish while on a dive off the coast of Cairns, Australia, in April 2010. Despite the fact they dove during a tropical storm, the Millers rank this dive high on their list of accomplishments. The dive also happens to be a great Travel Oops.

For Suzanne, who is director of Nursing for St. Luke’s Wood River Hospital in Ketchum Idaho and Jason, the executive director of Mountain Rides in Ketchum, it was their first ocean dive.  Now both are certified divers and Suzanne credits this crazy adventure in the GBR as the inspiration for her new passion.

Satellite view of the GBR
© NASA, by MISR

What kind of traveler do you consider yourself to be?

I’d probably like to consider myself an adventure traveler but considering so much of travel for me now is visiting family with my kids that I don’t get as much of a chance to be an adventurer these days.

We always try to seek out the local flair and do active adventurous stuff. I can go to the local pool here and sit by the pool, so I don’t really want to pay a bunch of money and travel far far away to just sit by a pool.

Where was one of your most memorable Oopses?

Diving at the Great Barrier Reef off of Cairns in Queensland, Australia 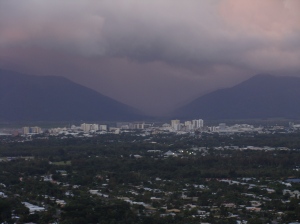 Cairns in the rain.
© commons.wikimedia.org

Tell us about it.

I was really excited, but I was a bit terrified as well, because I have an irrational fear of sharks. I know that sharks frequent the Australian waters, so I was pretty paranoid and freaked out, but thought, “You know what? It’s all good. I’ll get through it.”

So we fly into Cairns to find out there’s a typhoon in Cairns. And we’re like, “What the heck.” Literally, the water was knee deep at our hotel. We were sloshing through huge flood zones. It was insane. And I thought, “Well, there’s no way the boats are going to go out.” So I just thought maybe we’ll shop and go to a movie. There’s no possible way they’ll be able to take tourists out to these reefs.

But I was wrong. We were still totally full on. The [numbers of] passengers were way lower because I think people were freaked out. So, on the plus side, we got upgraded to an awesome boat that had fine china and a champagne toast for the price of the “low rent” boat that we were supposed to be on.

So that was awesome, but still, my trepidation is pretty high because of my fear of sharks. So we go to check in and they say, “You need to wear this full body protector.” They [the protectors] are not even really a wet suit; they’re like a spandex — very flattering— spandex one piece and I’m like, “What the hell is this for?” It was warm [in Cairns] — even though there was a typhoon, it was warm, so I didn’t really understand why we needed this, and they said that basically the jellyfish are microscopically small, smaller than a fingernail. You can’t see them, so you can’t avoid them and they’ll kill you instantly.

Awesome — and here I was afraid of the sharks. Sweet. So anyway, I’m a trooper, and I’m like, “I got this. I’m going to do this. It’s the chance of a lifetime. I’ve got to just go for it.”

So we get on the boat and the first thing they do is make an announcement saying the seas are incredibly rough and “here’s your life jacket and here’s what we do in the event of the boat capsizing.” 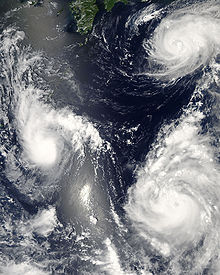 It’s just getting better and better. And then they make an announcement that if you’re getting sick, you need to step out on the deck, because one: fresh air makes you feel better and two: if you don’t, you’ll make other passengers sick.

So there’s this man who probably didn’t understand the instructions and starts barfing his head off five minutes into the ride, and he just sits in his place just retching and retching over and over again. And it was just horrifying because it was making us all want to throw up.

And his whole body is just heaving and he’s barfing into a bag. All these crew members were coming over to him and saying, “sir, come outside.” He just won’t move and stays inside. We just had to endure. So we sipped coffee out of our fine china. It was pretty hilarious.

Anyway, we got to our place where we were going to dive and it was an introductory dive, so I was going to have my instructor with me the entire time. But I was still just so freaked out, and I was literally…they give you a five-minute intro like, “Here you go. You’ve got the important things to remember.”

Then, total panic sets in, and I’m shaking and tears are rolling up in my eyes and I’m like, “this is it.” We only got five minutes of instruction. I know there’re sharks down there. I’m totally going to die. I’m going to screw up when I come up and get the bends and all this drama is going through my mind.

We go out to the back platform and this girl gets in before us, and she just panics She loses it; she’s coming out of her skin and they have to get her out. And I said, “That’s me that’s totally me. I’m going to lose my opportunity. We’ve already paid for it, and we’ve bought this stupid camera. What am I going to do?”

And  literally we get into the water and it was the craziest thing — all my fears just completely evaporated. Just vanished and I was like, “This is cool.” I’ve got this. This is no worries. I’m totally fine. I started breathing, and I was totally fine.

I look over at Jas and give him the “I’m-okay-are-you-okay?” sign they taught us in class. And he kind of gives me the “Yeah, I’m cool.” So we go down and I’m thinking that I don’t know why I was so freaked out because this is totally great.

So you’re literally linked arm-in-arm with the instructor. The instructor is in between Jason and me, and we’re cruising around and she’s pointing out all this cool stuff.

And with the typhoon, you can imagine that it’s not the blue sea that you think of when you think of the tropical Great Barrier Reef. It’s grey and murky and the visibility was horrible, but it was still awesome. It was an awesome experience.

It was probably about 20 minutes into our dive when all of a sudden, the instructor just leaves me, and I thought, “You can’t just leave me!”  She signaled, “You’re okay. Just stay right here.” And I was thinking, “Oh my God, what’s going on? Something is wrong.” 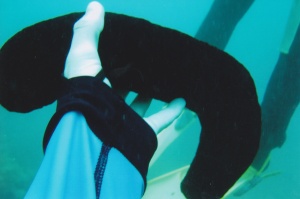 And lo and behold, Jason had been so freaked out the entire time that he had used up all his oxygen — all of his air supply — way too fast. So she had to take him back up to the boat, but I still got to dive for about 10 more minutes. It was hilarious, because he had been the one going, “Don’t panic — it’s fine you’re going to be just fine.” And he is the one that ends up panicking, and I ended up having a blast.

Do you remind him of that?

Every time we retell it, it becomes even better of a memory, every single time. I think there were moments that day when I was kind of bitter and not psyched, and now I look back and think that was the best day ever. So, I think just telling the story does make me realize what a cool adventure it was and how lucky I was to experience it. I love telling stories because I think that stories, along with pictures, are the things that when you can’t be traveling and you’re stuck at work, they can take you back to a place and time when you were an adventurer and you were doing something you don’t get to do in your every day life.

What’s it like telling people that your first time diving was in the middle of a typhoon?

It makes me feel a little bit like a bad ass. Because, already, you feel kind of cool if you dive, and then to have done it in such crazy circumstances, I feel kind of tough like, “Yeah, not much scares me.”  Even though I was terrified.

What advice would you give to people if they were in the middle of an Oops?

I think the way I look at travel — it’s such a gift and it’s such an adventure. Even if it’s not what you expected, you just have to go with it and say, “This is an adventure”  — no matter how it turns out, because it certainly wasn’t what I had expected and what I had envisioned like the post card. But I knew that this was such an opportunity and an opportunity that most people don’t get to experience.

So I always remember how lucky I am and you just have to go with the flow. The best thing is that it’s the Oopses that make the best stories later on.

What do you think of diving now?

I’m hooked and we’re already talking about going to Hawaii for our 15-year anniversary. I love diving and I owe it all to this one really crazy experience that, in hindsight, the fact that it actually came off without a hitch is pretty incredible with all those different factors playing into it. So it turned out great.