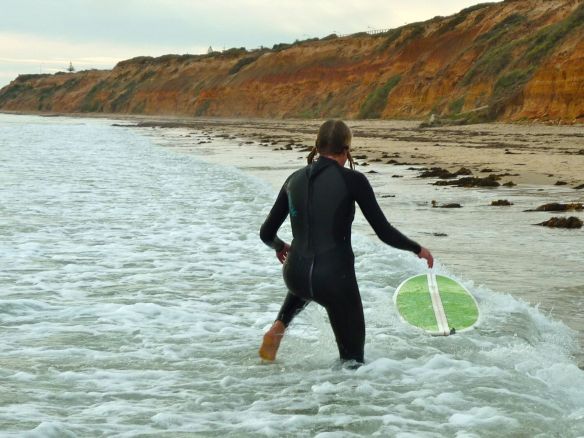 A nose enema of salt water surged through my nasal passages and then rushed out through my nostrils taking mucus with it in a salty, snotty blob. While I rose up in the ocean foam, my oversized rash guard billowed and water flushed through the too-big wetsuit I was wearing.

The leash attached to my ankle tugged my leg as the surfboard caught another wave without me. Another small water wall came by and knocked me off balance and cold water flowed through my suit once more. 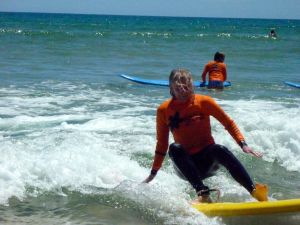 This battering did not matter, however, because I had stood up on a surfboard. Although the experience only lasted for less than one minute, I had ridden a wave before another one slammed down and churned me up. It was short but awesome and I wanted to do it again.

In fact, it was January 6, 2010, and already I had fulfilled my New Year’s Resolution, which was to try surfing, a sport I had always wanted to learn. Aqua Camp, in Santa Barbara, CA, had inspired me. My parents enrolled my sister and me in the program during the summer of 1980.

We went to the beach every day to body surf, kayak and swim. Fascinated by their fluid movements, I watched the surfers work the water. Although Suz and I would yell out the chorus to Queen’s “Another one Bites the Dust” (the song was huge that year) every time surfers fell, I totally envied and admired their skills.

Thirty years later my husband Kurt and I found out we would be living in Australia with our two kids while I taught high school in Adelaide. Immediately, surfing became a top entry on the To-Do List. We arrived in Sydney, Australia on January 3 and three days later I gave surfing a go.

So what better place to learn than at Manly Beach, one of Sydney’s special spots along its fantastic coastline? Kurt encouraged me and said he would hang out at the hotel with our kids, Eddie and Kasey. Another American exchange teacher, Delene, with whom we had hooked up also wanted to surf.

We arrived for our lesson at 4 p.m. on an overcast day. Just the day before, the beach had been a minefield of blue bottle jellyfish, and of course, rips abounded. Consequently, I was a bit nervous. However, James, our surf instructor, referred to rips affectionately, making them sound like your friends. After paddling out, I learned why since it’s much easier with the help of a rip. 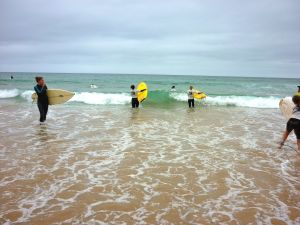 There we go. © Kurt Glaser

After trying unsuccessfully to get up on my own a few times, the other instructor, Paul, who was exactly the stereotypical hot surfer, swam over and held on to my board. I’m not sure whether it was because Paul was so good looking or the fact that he was almost fully submerged in the ocean, therefore, making him the instant shark bait instead of me, but I relaxed a little. He coached me through the wave I would eventually catch. “Go, go, paddle, paddle, paddle!” he prompted. 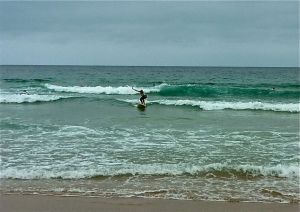 Finally it happened. By the end of the lesson, I probably got up three times in total, and it wasn’t for long. But that was enough to hook me. It was on. I wanted to surf. It wasn’t going to be just an item ticked off a bucket list, because I was ready to commit. 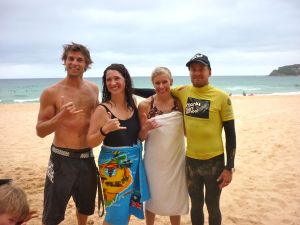 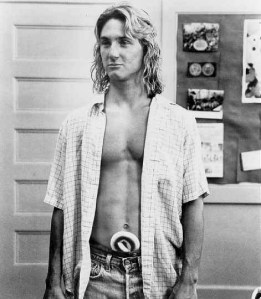 In fact, one of my all-time favorite movie characters, Jeff Spicoli from “Fast Times at Ridgmont High,” expressed a sentiment that seemed, after I stood up in moving water, like wisdom a Zen master may impart. Or at least Spicoli had the gist of a Zennism. “Surfing’s not a sport, it’s a way of life, it’s no hobby. It’s a way of looking at that wave and saying, ‘Hey Bud, let’s party!'”

After the lesson concluded, the term “stoked” also made sense. I even considered using it in a sentence later. But really, I needed to stay up for more than 45 seconds first. And, more importantly, I needed to get over my paranoia of sharks. “Stoked” doesn’t seem to fit in the same context as “scared shitless of sharks.” 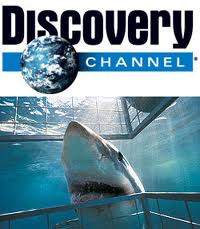 It didn’t help that just before we left for Australia, Kurt and I had watched “The Top 10 Deadliest Locations for Shark Encounters” or what should have been entitled, “The Top 10 Places Your Chances of Dying an Incredibly Painful and Gory Death Increase by 300 Percent,” during the Discovery Channel’s infamous “Shark Week.”

Of course, anyone watching a show like this knows Australia will be in the top ten locations. However, not only was Australia number two (right after South Africa, for which the show featured horrific, albeit impressive, footage of a massive great white breeching and chomping an unlucky sea lion), but it was South Australia that ranked number two. South Australia, the very state in which we were going to live for one year, is apparently a breeding ground for great whites.

Not long after our stay in Sydney and our arrival in SA, Kurt, the kids and I hit the beach at Port Noarlunga.  I signed up for another lesson. However, this time I didn’t have quite the personal attention. The instructor, who looked like he was 15, was no Paul. He really didn’t teach me much of anything.

“Ah, you have taken a lesson before?” He said. “No worries. Just go on out there and catch some waves!”

Right after that statement, I spotted several dorsal fins in the distance.

“Ah..those fins? They’re just dolphins out there.” How the hell could he tell from where he stood? 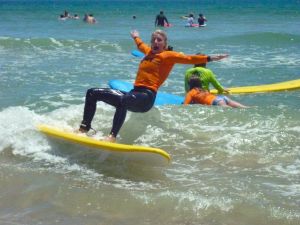 Perhaps, because I didn’t have hot Paul out in the water as my coach or as a ready-to-go shark snack, I tried to catch waves that were closer to the shore. “The Soup,” as Kurt called it, was really the foamy whitewater leftovers of the waves that had already crashed.

It didn’t matter to me. This water could still push a surfboard forward. Sometimes another wave would form, propelling me and giving me a real ride. It is the same beautiful feeling of skiing in powder when you feel like you’re floating.

Ultimately, surfing the soup also reassured me that I was in shallow enough water, so I could get away from a shark if need be. Or, if a nasty behemoth decided to stalk me, it would beach itself. I chose to ignore Kurt when he told me smaller sharks could still get me and get a good bite.

Kurt with our surfboard, The Wolf © Stephanie Glaser

When Kurt surfed, he stayed out deeper, past the break, waiting for the waves to come to him. He was an exceptional skier and natural athlete but surfing eluded him.

“Try the soup,” I would suggest when he would finally come in frustrated.

“At least you can practice getting up.” It was a not-so-subtle way of reminding him that I was riding something even if it was the chum of the ocean waves.  He shook his head, and I knew he really didn’t consider what I was doing as surfing.

I didn’t care because I loved it. Feeling no need to go out past the whitewater, I popped up many times and got that high from surfing. The high was short lived, however, since you couldn’t go very far in the foam. Often I would get up on the board and be scraping the sand moments later.

A few times to appease Kurt, I tried “real” surfing. Paddling, at least without a rip current, I discovered was much more difficult than I thought. Plus, when I tried to finally launch and catch a wave, I immediately pearled and nose-dived into the spin cycle.

Essentially, too, I had a very hard time sitting out on the board waiting for a wave. There was no way I could dangle my feet. I might as well be dangling them off the side of my bed for the boogeyman to grab.

Paddling on the surfboard, I pulled the water in strong strokes, trying to look like a confident sea lion from underneath the water rather than a struggling, injured one.

Ultimately, I would go back to my comfort zone — the soup. I’ve now surfed the soup in Australia, California and Mexico. I still feel the exhilaration each time. Even if it is not considered to be true surfing, I will argue that I am moving forward in water while standing on a piece of fiberglass. And I still feel like I can relate to Jeff Spicoli. “All I need are some tasty waves, a cool buzz, and I’m fine.”