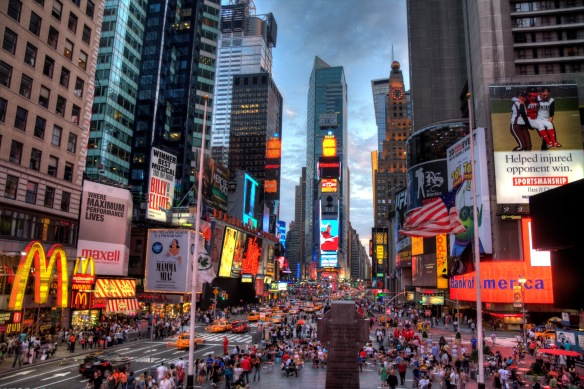 Gaping at the emerging New York cityscape through our smudgy cab window, I lurched to the side when the vehicle careened over into the next lane. Our cab driver leaned out his open window.

“What the hell? Get the FUCK out of my way!” He let go of the steering wheel with his left hand and flung it out the window with his middle finger completely erect. “You gonna CUT me off? (Rhetorical question, I guess.) You gonna cut ME off? We veered back into our lane, and I’m pretty sure there was screeching. I believe we burned rubber.

The cab driver leaned back out the window “You wanna die young?” He finally brought his head back in and to no one in particular, concluded, “Stick it up you ass.”

There was silence for at least a full awkward minute.

“So how long are you guys in New York?”

In the back seat, while my parents shared expressions of sheer shock, I looked over at my sister and our eyes both got wide.

AWESOME. TOTALLY awesome. It was like a scene out of a movie, and we had only been in New York a mere 30 minutes.

But this was exactly what we were hoping for. We lived in Eden Prairie, a suburb of Minneapolis and attended a high school that was pretty boring in terms of characters. We had a handful of Goth kids, a somewhat sizable “burnout” contingency and a massive preppy population. Overall, we experienced very little diversity. We got our excitement from watching MTV and going to concerts.

But in 1984, three years after our guiding force, MTV, had launched in NYC,  Suz and I, along with our parents, were in the Big Apple.

Somewhat amused and perhaps a bit horrified by our fascination with the lurid and seedy part of the city, my parents took us to a Broadway show. Today, I realize how lucky we were to see Cats, but at the time, I asked my mom, before the show began, if I could listen to my Walkman. Somehow it didn’t impress her that the cassette tape I brought was “Rebel Yell,” the latest Billy Idol release.

My parents cringed at our lack of appreciation, and then I believe they winced again when we expressed total teenage exuberance upon seeing Alan Hunter, one of the original MTV VJs walking on the street.

Madonna before Macy’s. from http://www.duchessfare.com/

The highlight of the trip was finding a set of five black rubber bracelets in Macy’s for $10. They were just like the ones Madonna stacked up and down her arms. The irony was lost on me that they were, of course, a Macy’s mainstream accessory although I was going back to Eden Prairie, so the bracelets would still be new and very cool.

When we got back from our trip, and I showed my grandpa Bud the bracelets, he informed me they were actually small vacuum cleaner belts. “Why, you can get all the belts you want at the Ax-Man.”

Sure enough, my grandpa took me to the Ax-man, a surplus store in St. Paul. Major Jackpot — an entire box of Madonna bracelets and they were 10 cents apiece. However, they still weren’t as cool as the ones from New York. 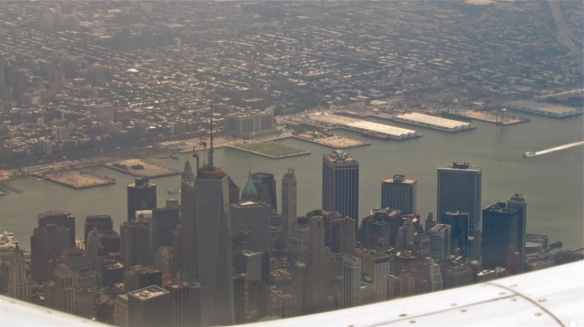 I see New York from the plane window. To me skyscrapers represent optimism. After all, they were built with a can-do, positive reach-for-the-heights attitude. So looking below at all the skyscrapers, I feel energized despite the fact that I won’t get a chance to explore NYC.

I’m only in New York for two hours on a layover from Toronto to Denver. It’s not even really worth buying a magnet. Still, I wander around the gates of La Guardia hoping to absorb some of NYC’s energy.

After buying a huge pretzel, I arrive at my gate. It’s crowded, so I sit down in one of the only available seats, next to a petite woman in sweatpants and Nikes. She wears oversized tinted glasses and looks at her watch.

We begin talking, and soon, I’m enamored with her Brooklyn accent.  She lives in Tucson but she was back in her hometown visiting her daughter and new grandson. 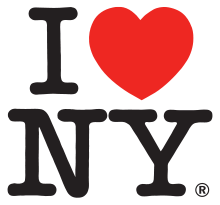 I tell her I love New York even though it’s been a while since I’ve seen the city.

We discuss the expensive cost of living in various cities. I mention that I used to live in California, and that it’s quite pricey there, too.

“Well, yeah, they’re not givin’ things away in LA, but come on, you gotta have 10 million dollars to live here.”

Clutching a tissue, she wipes her nose, and tells me that she’s recovering from the flu, which she caught from her daughter. Apparently, my new fluish friend experienced an intestinal insurrection just two days ago.

“I’m just glad the baby didn’t get it. I told my daughter to call me and let me know how he is.”  I hang on to “daughter” and  “call” since she pronounces them “dawter” and “cawl”

Wanting to use the restroom, my FF is concerned it will be crowded. I offer to check it out for her.

“You gonna be my scout? I’ll watch your bags.”

When I get back from checking the facilities, she’s on her phone.

“Yeah. Well give him some broth with a little bit of ginger, and give him another hug for me. It’ll be too late to call you when I get back, so call me in the morning.” 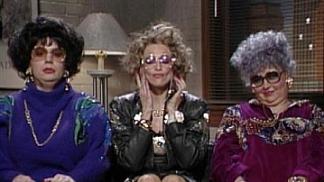 I love listening to her. It’s like watching a Saturday Night Live sketch. I half expect her to ask me to go get some “cawfee” so we could “tawk.” She puts her phone away.

“That was my daughter who gave me the flu.”

“He’s okay. I just hope she gives him some ginger broth. But, she doesn’t always listen to me. What are you gonna do?” She even shrugs her shoulders for emphasis. After about a minute, my FF looks at her watch again.

A few minutes later, a Delta attendant makes an announcement. The plane is delayed 30 minutes.

“How long is it delayed?” FF asks

“That better be all or there’ll be a suicide right in the airport,” she shakes her head and looks at her watch.

“So what do you miss about New York?” I ask her since I want to keep her distracted or she’s going to drive me crazy with her compulsive watch checking.

“Not much,” FF shakes her head, and she is quiet for a minute.

“Well, I guess I miss that people talk. Yeah, I miss that.  And you see other people around, walking outside and around town. You don’t see people walking around in Tucson.”

FF looks at her watch again and I realize that although I didn’t get out and see New York City, I experienced it anyway — however, this time it was a bit tamer. 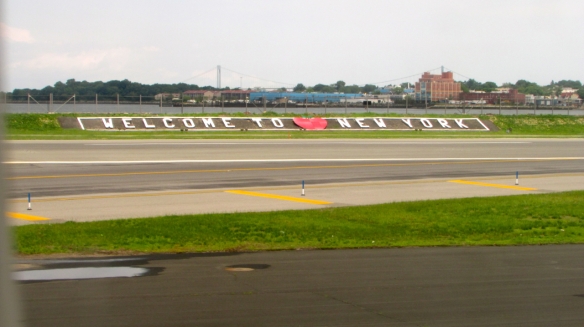 Back to the Big Apple