My sister Suzanne with some of the many mystifying candies in a Tokyo grocery store.

It’s 11 pm, Tokyo time, and under the ultra stark fluorescent lighting of ROX Department store’s snack section, I fixate on a “Crunky” chocolate bar, debating whether or not it will complement the sake-in-a-juicebox carton I found one aisle over. Having just arrived in Japan and going on nearly 36 hours of little-to-no sleep, I find choosing between the “Crunky”, “Melty Kisses” and “Fettuccine” brand hard candies seems like a monumental decision. The packaging of all displayed candies, snack items and sake flaunt an explosion of fonts, electric colors, Japanese expressions and, in many cases, super charged, albeit ambiguous, characters.

In my near delirious state, I am particularly drawn to a package of fried something, showcasing a green turtle with a yellow penguin-like beak who is decked out in a necktie. He’s hanging out with his lady, a large crustacean who’s pursing her full, red lined, Angelina Jolie lips. The mutant turtle penguin has two identical kids sporting shrimp head shaped winter beanies, complete with antennae. The cold weather gear, upon closer inspection, actually appears to be severed baby (sibling?) shrimp heads.

Somewhat disturbed, I turn to the display of a more recognizable item: Kit Kats. But even surveying the staggering stacks of Kit Kats with their wide array of flavors including, Wasabi, Cognac, Purple Sweet Potato and Matcha (green tea), is overwhelming. 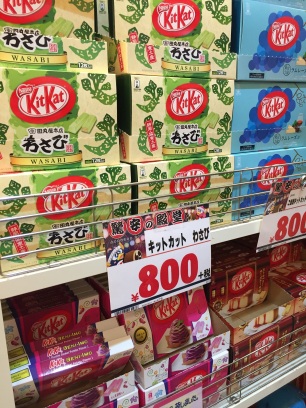 Essentially, despite being tired, I feel like an unsupervised, euphoric kid in this candy store, buying a basket full of crazy goods, including a candy kit of highly accurate looking miniature donuts with every type of sprinkle and glaze imaginable. I’m not sure if the sweets come as pictured or if molds are involved. It looks like some assembly may be required. It doesn’t matter because the end result depicted looks so worth it. 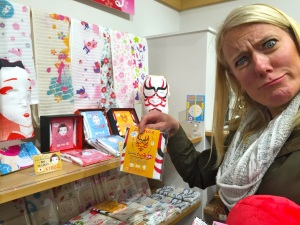 In an Osaka gift shop, Suz tries to figure out what the heck this samurai face mask thing is.

That is what I have come to love about the Land of the Rising Sun — it’s a whimsical, swirly, Technicolor, mystifying, sweet, savory, wacky land of wonder. Often, during my first visit, with my sister Suzanne, we had no idea of exactly what we were looking at or what was the actual impetuous for certain cultural phenomena.

So much of what you see in Japan is vaguely familiar yet a new discovery at the same time. The country inherently cultivates a curious mind. You feel giddy, playful and adventurous — like an explorer or a treasure hunter.